Korean Film Strides into the Desert 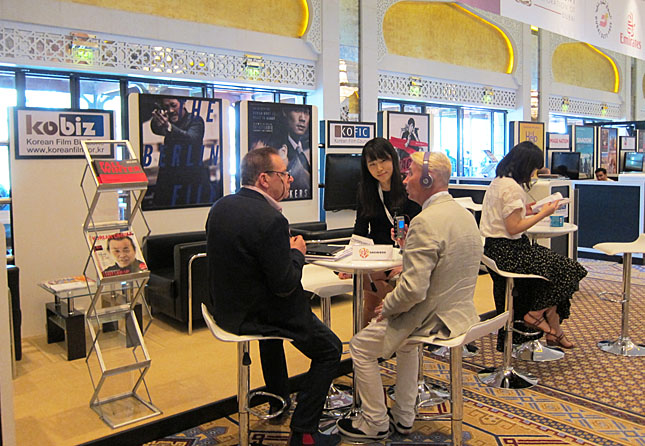 The Korean Film Council (KOFIC, Chairman: KIM Eui-suk) embarked on the promotion of Korean film in the Middle Eastern market. KOFIC installed a pavilion for the publicity of Korean film at the film market of the 9th Dubai International Film Festival, which started on December 9th. It was the first time that KOFIC joined the market. The accomplishment was made possible by virtue of cooperation with the Dubai Market.
The Middle East possesses a high potential as an unknown and new market, yet there have been no notable outcomes in the region so far. KOFIC has led the promotion of Korean film by installing Korean Pavilions at markets of various international film festivals in Berlin, Cannes, Shanghai, Hong Kong and Tokyo.

At the pavilion in Dubai this year, 4 Korean film companies, CJ Entertainment, Showbox/Mediaplex, Inc., Lotte Entertainment and M-Line Distribution, worked on sales activities. They also promoted Korean films that screened at the film festival; CHOI Dong-hoon’s The Thieves, KIM Ki-duk’s Pieta and KWON Oh-kwang’s Suffocation. According to a representative of a sales company, local people made inquiries on Korean films to quench their curiosity.
KOFIC tried to make Korean films known in South America as part of the new market expansion project this year by holding a special program for Korean films at the Mar del Plata Film Festival and participating in the Ventana Sur market in Argentina. People related to the film industry expect the participation in the market of the Dubai International Film Festival can play a role as the advance guard of Korean film’s penetration into the Middle East.
Any copying, republication or redistribution of KOFIC's content is prohibited without prior consent of KOFIC.
Related People Related Films Related Company