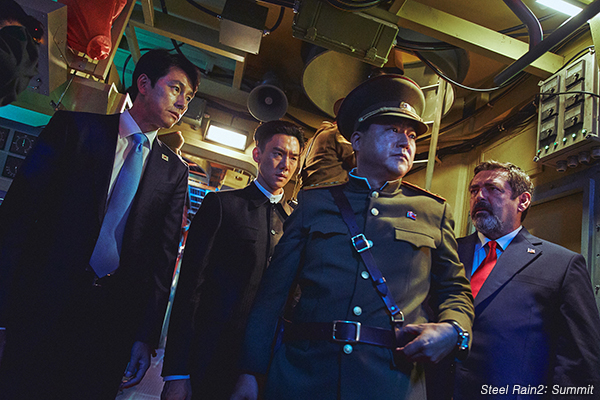 2020
| 131 MIN | Action, Drama
DIRECTOR YANG Woo-suk
CAST JUNG Woo-sung, KWAK Do-won, YOO Yeon-seok, Angus MACFAYDEN
RELEASE DATE July 29, 2020
CONTACT Lotte Cultureworks Lotte Entertainment Co.,Ltd
Tel +82 2 3470 3400
Fax +82 2 3470 3549
Email international@lotte.net
Three years after Steel Rain (2017) became an end-of-year hit, Director YANG Woo-suk and stars JUNG Woo-sung and KWAK Do-won are returning to theaters this week with the sequel Steel Rain2: Summit, one of this summer’s major offerings hoping to get viewers back into theaters.
However, though the new film once again explores a tense geopolitical situation involving governments from the Koreas and other major global powers, this time it features a brand new story and both JUNG and KWAK are playing different characters. In fact, the stars have switched their nationalities this time around, with JUNG playing the president of South Korea, compared to his North Korean agent protagonist in the first film, and KWAK playing a North Korean commander, as opposed to his South Korean government official from Steel Rain (2017).
President HAN of South Korea (JUNG Woo-sung) has been working toward brokering a peace treaty between North Korea and the USA. He meets with the leader of North Korea (YOO Yeon-seok) and the US president (Angus MACFAYDEN) for a summit, but at the same time, a North Korean commander (KWAK Do-won), who doesn’t believe in a peace accord, stages a coup back in Pyongyang. The commander’s forces then kidnap the world leaders gathered at the summit and hold them in a North Korean nuclear submarine.
Any copying, republication or redistribution of KOFIC's content is prohibited without prior consent of KOFIC.
Related People Related Films Related News