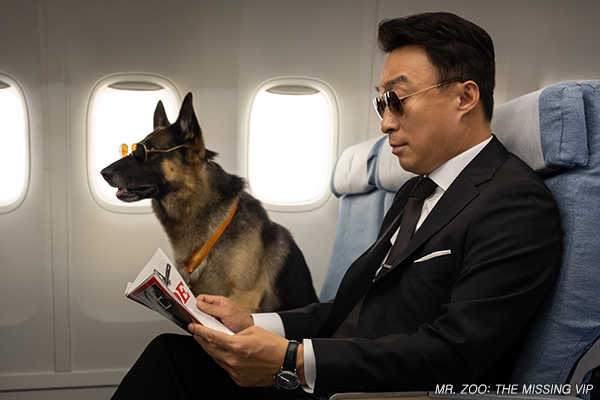 2020 | 113 MIN | Comedy
DIRECTOR KIM Tae-yun
CAST LEE Sung-min, KIM Seo-hyung, BAE Jung-nam, SHIN Ha-kyun
RELEASE DATE January 22, 2020
CONTACT Little Big Pictures
Email cjlee@little-big.co.kr
Following a freak accident, secret service agent Tae-ju (LEE Sung-min) acquires the ability to talk to animals. The only problem is, he hates animals. As he looks to continue his rapid rise up the ranks, Tae-ju accepts a duty to protect a Chinese panda named Ming-Ming, but when the animal is kidnapped by a terrorist organization, he goes after them and injures his head in an accident, following which he gains his new skill. Still on the trail of Ming-Ming, he finds that perhaps the only witness to the kidnapping is a retired military dog named Ali (SHIN Ha-kyun).
In a rather unusual coincidence, January 2020 at the Korean box office has assembled a trio of family-oriented titles that focus on animals. Robert DOWNEY Jr. just topped the box office with his fantasy adventure film Dolittle, while on the Korean side, this week sees the release of Secret Zoo and next week we get MR. ZOO: THE MISSING VIP, both of which are hoping to score during the busy Lunar New Year holiday box office season, which this year also welcomes the period political drama The Man Standing Next.
MR. ZOO: THE MISSING VIP sees The Spy Gone North (2018) star LEE Sung-min lead the cast, which also includes KIM Seo-hyung (The Villainess, 2017), BAE Jung-nam and SHIN Ha-kyun (Save the Green Planet, 2003) in this latest film from director KIM Tae-yun, known for the courtroom drama New Trial (2017) and the drama Another Family (2014).
Any copying, republication or redistribution of KOFIC's content is prohibited without prior consent of KOFIC.
Related People Related Films Related News