Aug 14, 2015
ALICE IN EARNESTLAND is a product of the Korean Academy of Film Arts. 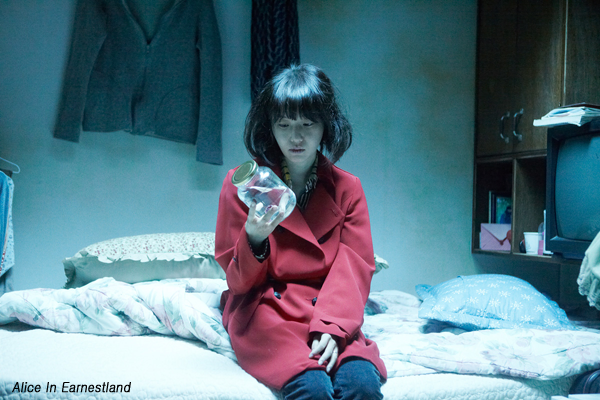 A modern twist of classic novel Alice in Wonderland, Alice In Earnestland finally debuted in local cinemas on 13 August after traveling to festivals and made $20,520 from 3,220 admissions on the opening day.
Directed by a first-time feature director AHN Gooc-jin with a significantly low budget of KRW 500 million (USD 425,000), less than 25% of the average production budget for commercial films these days, Alice In Earnestland is a drama about a poor woman who struggles to pay for her vegetative husband's care. The bitter drama is in the heated summer box office competition dominated by blockbusters such as Veteran, Memories of The Sword, Assassination and Mission: Impossible-Rogue Nation.
Though less overwhelming in size and fame, Alice In Earnestland has received amicable reviews during its festival run: at the Jeonju International Film Festival where it received the Grand Prize in the Korean Competition, jury members praised the film as “Funny, shocking and sometimes cruel, this film has enough invention and energy to take your breath away.” After the JIFF, Alice In Earnestland also went to the Shanghai International Film Festival’s Panorama section.
In addition, Alice In Earnestland has drawn the public audience’s attention thanks to LEE Jung-hyun’s presence. Though better known for her K-Pop activities, LEE originally debuted as an actress in JANG Sun-woo’s movie, A Petal, in 1996. Returning to silver screen as a lead (she has played supporting roles in a few movies including Roaring Currents) LEE’s performance is known to be shockingly excellent in Alice In Earnestland. It is known that LEE took the role for free of guarantee.
AHN studied film directing in KAFA and graduated with short film Stop by My House in 2008, which screened at the Bucheon International Fantastic Film Festival and Seoul Independent Film Festival. Alice In Earnestland is AHN’s first feature-length film.
Any copying, republication or redistribution of KOFIC's content is prohibited without prior consent of KOFIC.
Related People Related Films Related Company Related News