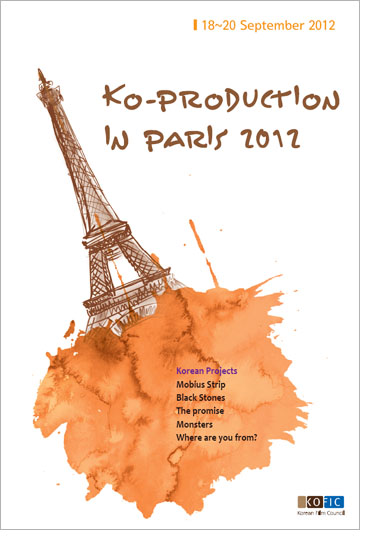 ‘Ko-production in Paris 2012’ will be composed of a presentation about ‘The World Cinema Support’, a new supporting system of CNC, a mentoring program for entries, and a business meeting. This year, 1 on 1 mentoring program and individual business meeting will be particularly enhanced for more practical support for co-production, so the outcome is expected to be good.

5 teams consisting of Korean producers or directors who have projects available for co-production with France will participate in the event this year. The entries are Promise, a new film directed by KIMJHO Gwang-soo, Monsters by KIM Baek-jun, who caught attention from inside and outside of Korea with Farewell, The Mobius Strip by MIN Byung-kook, who directed Possible Changes, and Black Stones by ROH Gyeong-tae, who has gradually become popular in France with Land of Scarecrows.

Marianne SLOT, a French producer from Denmark who has constantly work with Lars Von Trier, Laurent LAVOLE, French producer of A Brand New Life (Ounie Lecomte, Korean-French co-production), Guillaume de SEILLE, a producer who has co-produced with various nations including Korea, Turkey and China, Manuel Chiche, CEO of Wild Side Films, the leader in distributing films of renowned Korean directors like PARK Chan-wook, IM Sang-soo and NA Hong-jin in France, and Philippe Lux, who work for long years at ‘Pretty Pictures’ and ‘Le Pacte distribution’, has distributes a number of Asian films in France, and has worked as a selection committee member at Directors’ Fortnight of Cannes International Film Festival, will lead them as individual mentors.

While ‘Ko-production in Paris’ has met its 5th edition since it started with the name of ‘Business Campus’ in 2008, Korean films like The Housemaid (IM Sang-soo) and Hanaan (PARK Ruslan) as well as French films such as Approved for Adoption (Laurent BOILEAU, JUNG Henin), which was awarded at the Annecy International Animated Film Festival in 2012, have participated in the event.

‘Ko-production in Paris’ agreed on the partnership with CNC in 2011 and has played a pivotal role with KOFIC in activation of film exchange between Korea and France. KOFIC will continuously try to bear fruit from finding unseen foreign projects and practical co-production by activation of international exchange between film related people.
Any copying, republication or redistribution of KOFIC's content is prohibited without prior consent of KOFIC.
Related People Related Films Related Company