Aug 07, 2018
“I want to continue making films that leave a lot of room for interpretation” 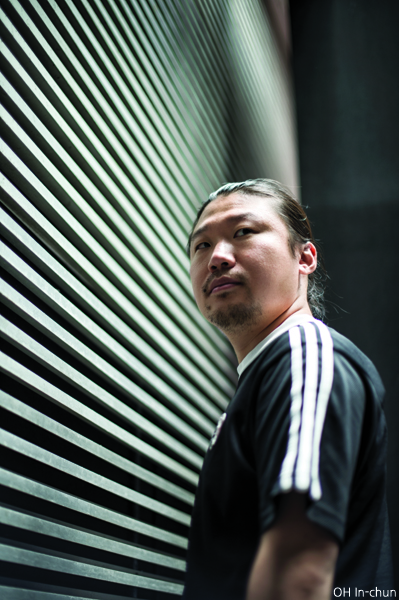 A police officer enters the DMZ on a secret mission but accidentally steps on a mine. The only way for her to reach the outside world is her Bluetooth earphone. The DMZ is an hour-and-a-half-long suspense thriller that takes place in a single location with only 3 characters. It was recently screened at the Bucheon International Fantastic Film Festival (BIFAN), and, prior to that, won the Best Action Feature award at the Arizona International Film Festival. Throughout his career, director OH In-chun has been focused on the action, thriller, and horror genres as he built his own cinematic world. We met with OH In-chun, a director who has freed himself from many financial restrictions with his inspired ideas.
How did you come up with the idea for The DMZ?
This is a story I had in mind even before I made my debut feature, Mourning Grave (2014). It was a story about a female police officer who would step on a mine, but she would somehow find a way to get out of this situation on her own. I also wanted to create a film that would combine The Hurt Locker, a film from one of my favorite filmmakers, Kathryn Bigelow, as well as Joel Schumacher’s Phone Booth. That’s how The DMZ came to be. Although everything happens within a single location and between 3 characters, I thought these elements were still giving many possibilities for stories. Actually, I had so many ideas of things I could talk about, I had to force myself to reduce them. I ended up with a few stories set in the DMZ that I decided to turn into a trilogy. The DMZ is the first installment in the series, and Dust Angel, which will be presented soon, will be the prequel. As for KILL ZONE, which I’ve just wrapped up filming, it will be the sequel. In Dust Angel and KILL ZONE, someone reports having seen a serial killer in Panmunjom, and special agents from South Korea and North Korea must collaborate. KILL ZONE will be focused on action, while Dust Angel will be closer to a hard-boiled thriller. 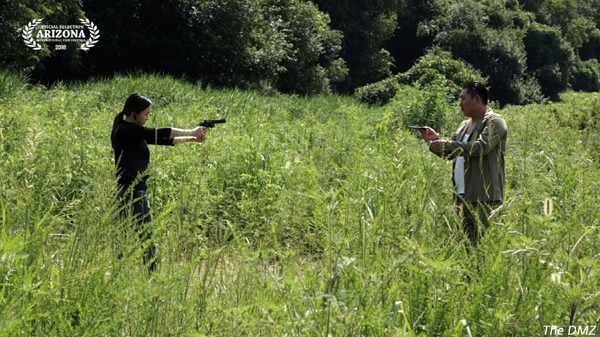 Is there a reason why you decided to set your trilogy in the DMZ?
Ever since I was young, I was very intrigued by this singular place that is like nothing else in the world. I think that this interest along with my imagination led me to make these films. Then, I wondered how I could tell a story about a female character in such a location. I always loved films like the Yes, Madam series from Hong Kong as well as John Cassavetes’ Gloria. I think that’s why I ended up with a woman as the protagonist.
You’re the director, the cinematographer, and the editor. Isn’t there any difficulty in assuming all these roles yourself?
When I was working on Mourning Grave, 12 Deep Red Nights (2015), and Chasing (2016), I was acting only as the screenwriter and the director, so I was able to focus on the directing. For NIGHTSCAPE (2017), Wol-ha : Very Bad Moon Rising (2017), The DMZ and Dust Angel, I was the cinematographer as well. Since I was in charge of the cinematography, I could attempt the angles and the movements I wanted right away, and that was fun. Usually, on the set, there are the actors, and before them is a camera, and behind it is the director watching through a monitor. I enjoyed being physically closer to the actors, as we would communicate directly and discuss our ideas instantly. Digital filmmaking equipment has developed a lot. Even smaller cameras yield high-quality images, so I didn’t encounter any trouble while filming. NIGHTSCAPE, which I shot with a smartphone for the challenge, was invited to the 7th Toronto Smartphone Film Festival as the closing film. This film was mostly shot with an iPhone 6S. The concept of the film was to make it look like a found footage, so using a smartphone allowed me to stay very close to my subjects while creating dynamic and impromptu moments. The film was also invited to the Montreal World Film Festival, and they were surprised to find out that I really shot it with a smartphone. Directors like Steven Soderberg have tried to film with smartphones before but shooting a feature film with a smartphone is still widely considered quite a challenge, so they were impressed by my film. 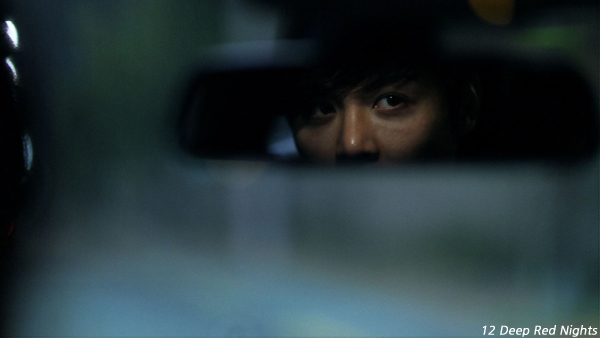 Aside from the films you mentioned, I’ve heard that you still have other projects like A KILLER THRILLER TONIGHT and DEATH CAB.
I finished shooting A KILLER THRILLER TONIGHT in January, so I’m now doing post-production. It’s a female-centered thriller that is at the same time a fiction and a mockumentary. DEATH CAB is like a school horror film version of NIGHTSCAPE. I’ll start shooting it in September. I also have a horror film project called 13th Friday, and I’ll start shooting in August. Night at the Evil Gallery which was selected at BIFAN’s NAFF2018 It Project, will have quite a lot of budget. It’s a story about a gallery that only exhibits ghost pictures. It’s currently in development. It might be easier for you to get the gist of it if I tell you that it’ll be a mix of David Fincher’s Panic Room, William Malone’s House on Haunted Hill, and Eduardo Sanchez and Daniel Myrick’s The Blair Witch Project. I got the idea for this story a long time ago, but I ended up working on several projects at once. That doesn’t mean I don’t have affection for each and every project, though.
Don’t you feel compelled or have the desire to release your films in theaters?
I’m sure all directors and producers would love to introduce their films to a bigger audience. My films are low budget, shot in a short amount of time, and are more focused. It’d be nice to get theatrical releases, but my goal is to keep introducing my work through IPTV, VOD, streaming services, international film festivals, and film markets. That’s how NIGHTSCAPE and Wol-ha : Very Bad Moon Rising keep reaching new audiences these days. I’m satisfied just to know that they’re finding new audiences. 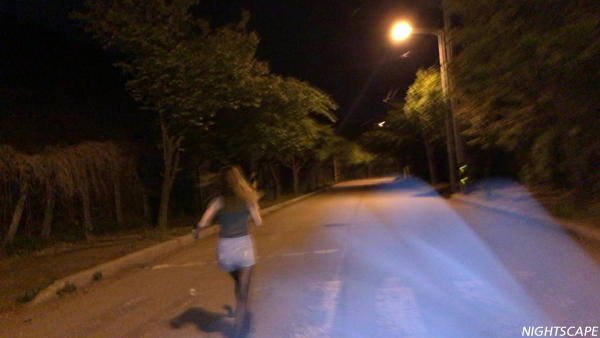 I heard that you started studying filmmaking in your late 20s.
I wanted to become a director ever since I was young, but I didn’t know how. I wasn’t from Chungmuro, and I had never made a short film before. That’s when I learned about the Korea National University of Arts. They had their own test for the admission process, so I didn’t have to take the national aptitude test. After hearing that, I just went and took the test, and fortunately, I passed. Thanks to that vague dream from my childhood, I was able to find the courage.
What kind of films do you want to make?
I would like to make a horror, thriller, or an action film that audiences from all over the world could enjoy. Whether people compliment or criticize the film after watching it, my dream is to keep making films that start conversations and leave a lot of room for interpretations.
Any copying, republication or redistribution of KOFIC's content is prohibited without prior consent of KOFIC.
Related People Related Films Related Company Related News 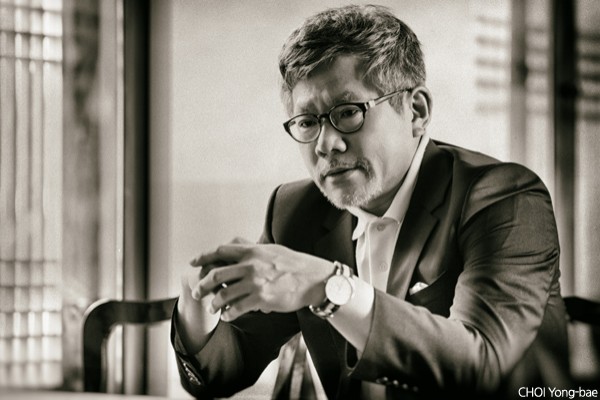 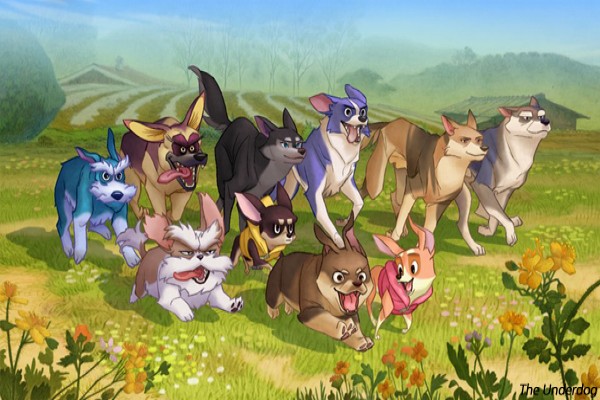 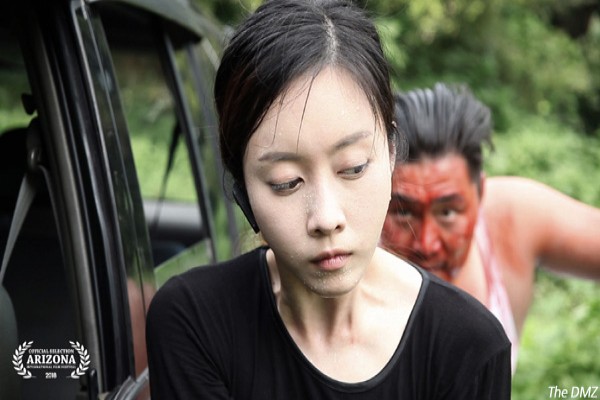