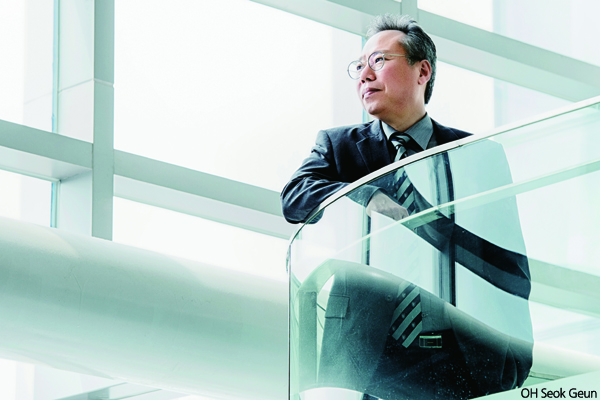 When the nomination of OH Seok Geun as the new chairperson of Korean Film Council (KOFIC) was announced three months ago, everyone agreed that he was fitting for the role due to his experience on the set (as a film director) and in administration (Busan Film Commission). This is also why many people were far from apprehensive and instead anticipated the start of his tenure despite the many pending issues awaiting the new chairperson, such as the scandal. We met with Chairperson OH Seok Geun to hear about his vision for the organization as he takes the mound to heal KOFIC during the next three years.
On April 4th, the organization apologized to the citizens and filmmakers for reducing financial support for independent films and the Busan International Film Festival after they were added to the blacklist created by the previous government. Why did you decide to make an apology at your very first official appearance?
The scandal has been an open secret in the film industry for a while. It was a problem everyone could feel, and everyone was exhausted by it. That’s why I thought we shouldn’t delay the apology any longer. If we do not apologize for the past, we cannot move forward. We’re trying to organize a gathering to discuss future programs for those who were wronged by the blacklist. Once we decide on a program together, we’ll start preparing it in May in order to reflect the changes in next year’s budget.
As a result, the “Special Truth Commission for the Investigation of Past Affairs and Reform” (later: Special Committee) that recently started meeting will become important.
An internal probe by the Ministry of Culture, Sports and Tourism’s committee, special prosecutors and the Board of Audit and Inspection of Korea, are conducting an investigation on artist blacklisting. If there is any need to clarify the facts and to take responsibility, we will follow the necessary procedures. More importantly, we should admit our mistakes and adopt new policies to prevent the same thing from happening again. Through the Special Committee, we will thoroughly disclose what happened to the organization and spell it out in black and white.
The organization went through restructuring. What was on your mind while preparing the changes?
The biggest problem was getting our employees to enjoy their jobs again. I think we were all fundamentally asking, “who are we?” and “are we civil servants or filmmakers?” Most of our employees joined the team because they love films. I had the feeling that they were proud of their jobs. However, their pride has been hurt. KOFIC is an organization that works hand-in-hand with Korean filmmakers, but we were unable to work. I understood it was the first thing I had to build back as the new chairperson.
KOFIC also announced the results of its “future plans task force”. The ideas seem promising and it looks like KOFIC is becoming true again to its role. Notably, film policy research is back on the agenda after nine years.
I think there are two main roles for KOFIC. One is to think about, develop and present policies that are needed by the film industry. Another is being the mediator who creates a fair environment. I think these are the purposes for KOFIC’s existence. During my term as the chairperson, I plan on focusing on film policy research.
There is a plan to found an Asian Film Promotion Agency (). Where did this idea come from?
What do international businesses and the foreign market mean to us? What about France, USA, South America and China? What do they mean to us? I believe it’s important how we approach each country with respect to building our international businesses. Out of them all, the Asian countries are most welcoming to Korean films. They have the desire to interact with Korean films and Korean filmmakers. We also share the same cultural values. That’s why I believe we can share many resources including exchanging talents, making co-productions, and providing filmmaking training.
I heard you met with 11 countries from Asia at the Hong Kong Filmart, including Vietnam and Singapore. Did you meet them to discuss the Asian Film Promotion Agency?
I decided it is important to inform the international film industry and national agencies about the changes made within KOFIC. I also took this opportunity to inform them of my purposes and objectives for creating the Asian Film Promotion Agency. The national promotional agencies I met agreed that solidarity was necessary, especially cultural and talent exchanges. The Philippines and Singapore were enthusiastic about coming on board.
It’s a large-scale project you’re planning. Will we get to see some results this year?
That’s our plan. I intend to travel to Beijing in mid-April to meet with the government personnel there and discuss the matter.
There was an announcement that KOFIC will start a production guarantee fund for Korean films.
Guarantee systems for content (including films) that are run by other institutions usually operate in the same way as a loan, so many projects find themselves limited while raising funds. We’re looking into introducing a guarantee policy that’s investment-based and is more fitting with the current industrial system. Once the research is finished and we secure enough budget to run the system, we will plan to start a production guarantee fund. If this system is found to be successful, the unfair trading practices currently going on between the big and small businesses will also improve, and the audiences will be able to find more diverse films in theaters and online.
Please tell us how you intend to serve during your three-year term.
From now on, KOFIC will be on the same page as the Korean film industry. We’ll share everything with the filmmakers.
Any copying, republication or redistribution of KOFIC's content is prohibited without prior consent of KOFIC.
Related People Related Company Related News