THE AGE OF SHADOWS Guns Down the Competition 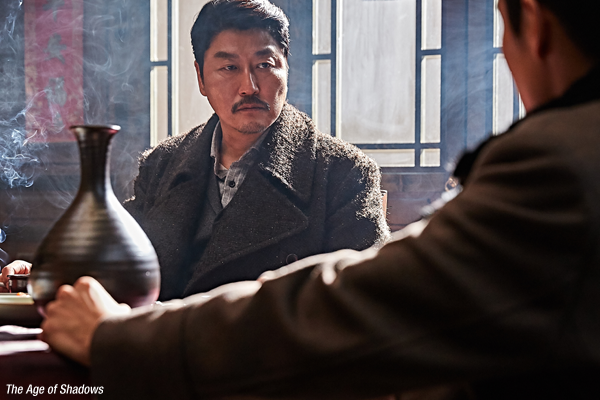 Several new releases invaded the charts in the weekend before the Chuseok (Korean Thanksgiving Day) holiday, which will give us a five-day weekend this week, but there was only one real contender despite newcomers taking up the top five spots. Business rose over 50% after last week’s dip, reaching 2.34 million admissions, with 84% of that total coming from homegrown releases.

Topping the chart in commanding form with a 70% market share was KIM Jee-woon’s critically-acclaimed Colonial Era action-thriller The Age of Shadows. The project marks a triumph for Warner Bros., fully financing a local picture for the first time. Over the weekend, the film brought in 1.61 million viewers (USD 12.07 million) and has accumulated 2.17 million admissions (USD 15.88 million) since Wednesday. Very enthusiastic responses will give it the edge to fill its pockets throughout the upcoming holiday. The Age of Shadows start was a shade below that of KIM’s The Good, The Bad, And The Weird in 2008 (1.65 million admissions) but longer legs may give it a higher total in the end.

Opening in a distant second place was Joseon Era drama The Map Against the World from CJ Entertainment and veteran director KANG Woo-suk. The film drew down just 220,000 viewers (USD 1.6 million) over the three-day weekend and 300,000 in five days (USD 2.14 million).

Alice through the Looking Glass mirrored its poor performances elsewhere with a measly 156,000 admissions (USD 1.16 million) debut. Over five days the Disney sequel has brought in 193,000 spectators (USD 1.42 million).

Local animation Lost in the moonlight had a lacklustre debut in fourth place with 55,000 viewers (USD 382,000) while foreign animation Underdogs was also passed over with just 49,000 spectators (USD 345,000).

Hollywood remakes Ben Hur and The Magnificent Seven will enter the fray this week but neither is expected to unseat The Age of Shadows from its perch.