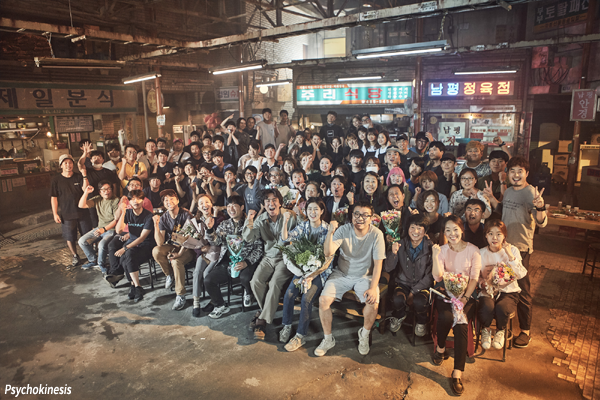 Following the smash global success of TRAIN TO BUSAN (2016) Director YEON Sang-ho will return to theaters next year with the high concept black comedy Psychokinesis, which wrapped a four-month shoot on August 6th in Chuncheon, Gangwon Province. Along for the ride were actors RYU Seung-ryong, SHIM Eun-kyoung, PARK Jung-min, JUNG Yu-Mi and KIM Min-jae.
RYU stars as a man who unexpectedly develops superpowers. He uses them to try and help his daughter, played by SHIM, but encounters trouble along the way.
YEON first made his mark as a filmmaker with his well-regarded, dark animated features The King of Pigs (2011) and The Fake (2013), which both screened at festivals around the world. Last year he released his first live action film TRAIN TO BUSAN, which debuted at the Cannes Film Festival before accruing global box office receipts in excess of USD 130 million, the largest ever total for a Korean film, as well as its animated prequel Seoul Station.
RYU hasn’t been on the big screen since The Piper and THE SOUND OF A FLOWER in 2015, though he was heard in the voice cast of Seoul Station, along with SHIM, and he will also appear in the thriller Night of 7 Years, currently in post-production. SHIM, known for Sunny (2011) and Miss Granny (2014), appeared in Fabricated City and The Mayor this year.
Rising stars PARK impressed many in DONGJU: The Portrait of A Poet last year and is top billed in several upcoming productions. JUNG, who co-starred in TRAIN TO BUSAN is back in theaters this week in KIM Jong-kwan’s The Table. Character actor KIM Min-jae is currently in theaters with The Battleship Island.
Psychokinesis is currently in post-production and is due to be released next year. The film is produced by REDPETER FILMS (TRAIN TO BUSAN) and will be released by Next Entertainment World.
Any copying, republication or redistribution of KOFIC's content is prohibited without prior consent of KOFIC.
Related People Related Films Related Company Related News