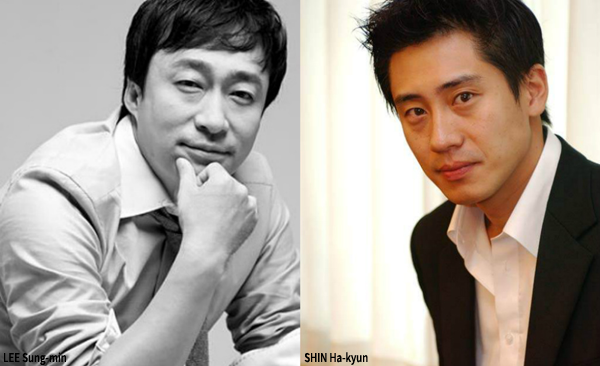 Following his youth comedy hit Twenty (2015), director LEE Byoung-heon is returning with Wind Wind Wind (translated title). Joining him for his latest project will be stars LEE Sung-min and SHIN Ha-kyun.
Filming is expected to begin on March 13th for the film, which will be set on Jeju Island, known for its strong winds, and will deal with tales of romance between two men and two women. LEE Sung-min will feature as the Casanova of the island while SHIN Ha-kyun will play a quiet man who dreams of becoming a chef and who married to the playboy’s sister.
Seasoned actor LEE is known for leading a supporting parts in varied works such as Broken (2014), A Violent Prosecutor (2016) and the upcoming Sheriff. Meanwhile SHIN is well known to foreign audiences for classic films such as Sympathy for Mr. Vengeance (2002) and Save the Green Planet (2003). He recently wrapped the thriller Room No.7.
Featuring as SHIN’s wife will be SONG Ji-hyo, a major star on the small screen whose last silver screen credit was in the gangster thriller New World (2013) while LEE El, another TV star with film credits such as Man on High Heels (2014) and Inside Men (2015), is on board to play a love interest for LEE’s character.
Director LEE debuted in fine form back in 2013 with the indie comedy Cheer Up Mr. Lee, which debuted at the Jeonju International Film Festival. His commercial debut Twenty was a major hit, welcoming 3.04 million viewers (USD 20.31 million).
The film will be distributed by Next Entertainment World.
Any copying, republication or redistribution of KOFIC's content is prohibited without prior consent of KOFIC.
Related People Related Films Related Company Related News