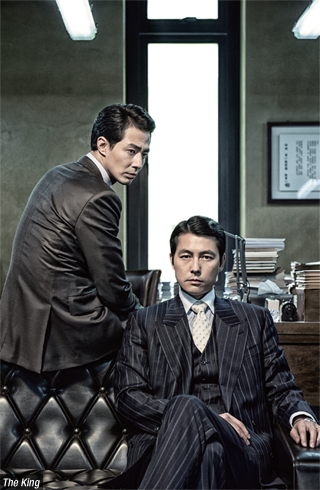 The King, the new thriller from The Face Reader (2013) director HAN Jae-rim, has finished filming. Earlier this month, JUNG Woo-sung, ZO In-sung, KIM A-joong, BAE Sung-woo and the rest of the cast and crew completed the five month-long shoot. Shooting across locations in Seoul, Busan, Daejeon and elsewhere, the production experienced no major incident while filming its 104 scenes. Distributor Next Entertainment World (N.E.W.) is planning to release the film in December.

The film is already one of the most anticipated titles of the end of year period, due to its combination of superstars JUNG Woo-sung, last seen in Remember you this year and soon to be seen in Asura, with ZO In-sung, who has not appeared in a film since 2008’s A Frozen Flower. The film follows a man who fights tooth and nail to become a prosecutor and begins to abuse the system through his connections when he starts to taste power.

Prior to his hit period drama The Face Reader, which featured SONG Kang-ho, director HAN helmed the offbeat romantic comedy Rules Of Dating (2005) and the gangster drama The Show Must Go On (2007), also starring SONG.