THE KING Edges Out CONFIDENTIAL ASSIGNMENT 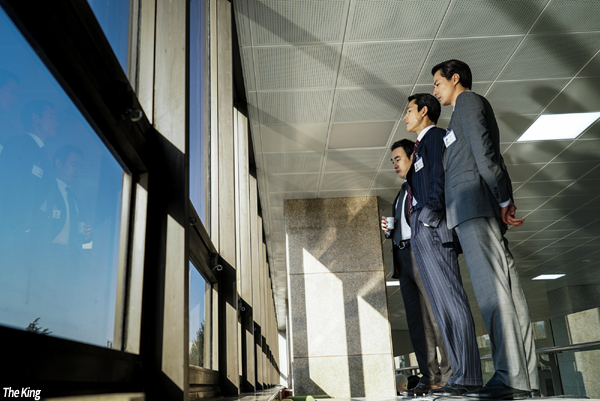 Business picked up going into the weekend preceding the Lunar New Year holiday week as local studios released their first major titles of the year. Ticket sales rose almost 30% to 3.12 million while the domestic marketshare soared to 76% compared to last week.
Taking the first place spot in a hotly contested weekend by a wide margin was Next Entertainment World’s judicial epic The King. From The Face Reader (2013) director HAN Jae-rim and featuring stars ZO In-sung and JUNG Woo-sung, the film brought in 1.31 million viewers (USD 9.63 million) over the weekend and has so far banked 1.85 million admissions (USD 13.18 million) in five days.
Opening in second place was CJ Entertainment’s spy action-comedy Confidential Assignment, which brought in 846,000 spectators (USD 6.11 million) during the frame and 1.15 million entries (USD 8.11 million) since its Wednesday start. The Hyun-bin and YOO Hae-jin combo may have had a lower start than The King but appears to be gaining after receiving stronger reactions from general audiences despite lower critics’ marks.
In third place after a 42% dip was Disney’s Moana, which added 335,000 entries (USD 2.29 million) to a respectable haul which now counts 1.25 million admissions (USD 8.41 million).
Veering down a steeper 65% was the Japanese animation Your Name. In its third week, the imported sensation brought in 261,000 viewers (USD 1.86 million), giving it 3.05 million spectators (USD 21.15 million) to date, which makes it the most popular Japanese film of all time in Korea.
Another animation followed in fifth, the local title Turning Mecard V: Resurrection of the Black Mirror. The film opened with 197,000 entries (USD 1.3 million) and 277,000 spectators (USD 1.76 million) since opening earlier last week.
Meanwhile, Xavier Dolan’s It’s Only the End of the World, topped the diversity chart with 7,500 admissions (USD 52,500) and 13,500 tickets sold (USD 91,500) overall.
With the Lunar New Year falling this coming Sunday, business will grow throughout the week and a tense battle for the box office crown will take place between The King and Confidential Assignment, with the former standing a strong chance of reversing the order at the top of the chart. The new Resident Evil opens on Wednesday but appears unlikely to come near the top of the rankings.
Any copying, republication or redistribution of KOFIC's content is prohibited without prior consent of KOFIC.
Related People Related Films Related Company Related News