Trends and Review of 2014 Box Office

Jan 29, 2015
The year 2014 saw four films reach the ten million admission milestones in Korea. Among them, Roaring Currents ran fastest to the milestone, becoming Korea’s new all-time top-grossing film. Some foreign films enjoyed strong popularity in Korea although they failed to do so overseas. Interstellar and Begin Again ’s box office performances in Korea were exceptional in comparison to their boxoffice scores in other countries. In addition, an unexpected independent documentary, My Love, Don’t Cross that River , made headlines for its performance. 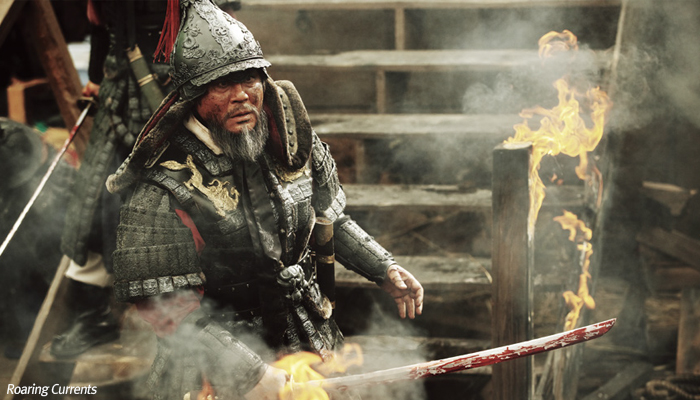 The global economic crisis impeded the growth of the Korean film industry. But in 2010, Korean cinema began to rebound. The trend continued in 2014. First of all, ticket sales swelled to USD 1.66 billion in 2014 from USD 1.55 billion in 2013. Ticket sales surpassed USD 1 billion in 2009 for the first time in Korea. Since then, they have grown rapidly -- 6.8% in 2010, 6.8% in 2011, 17.7% in 2012 and 6.6% in 2013. In 2014, they continued to grow. Among them, Korean film ticket sales stood at USD 820.6 million, accounting for 49.3%. Its share of 49.3% was down 9.4% from 58.7% in 2013. This means that the overall film ticket  sales expanded but the proportion of Korean films dropped. In 2004, Korean film ticket sales slid by USD 89.3 million from 909.9 million in 2013. Admissions to Korean film added up to 107.7 million, recording a share of 50.1%. They also dropped by 19.95 million from 2013. On the other hand, admissions to foreign films crossed 100 million for the first time to reach 107.36 million. Foreign films’ share rose over 20% in the ancillary market. It is forecast that in 2015, their ticket sales will continue to grow and surpass USD 300 million for the first time. There were a total of 1,117 films (232 Korean films and 885 foreign films) that reached screens in 2014, reaching a four digit figure for the first time.
Since The Thieves (2012), at least one or two films have reached the ten million audience milestone annually. In 2014, four films made it to many peoples, surprise. The Attorney, released in December 2013, surpassed ten million viewers by 2014. Frozen, Roaring Currents and Interstellar followed suit. Ode to My Father premiered in December 2014 and attracted over ten million viewers in January 2015. It is expected that industrial growth and the expansion of distribution and screens will lead to an increase in mega hit films. At the moment, Korean cinema is powered by megahits which attract over ten million viewers.

Unexpectedly Huge Success of Roaring Currents and Interstellar
Roaring Currents, released in the summer of 2014, surpassed ten million admissions in 12 days, and passed the 15 million milestone, which was deemed impossible, and arrived at the final number 17,611,849, carrying away the garland of becoming the top grossing film of all time in Korean cinema. This unbelievable success of the action and spectacle war film about Korea’s most popular and respected historical figure Admiral YI Sun-shin is attributable to the fact that the film offered viewers what they wanted most, a spectacle that let them escape from a sense of loss in reality. This was not a simple box office record but a social event.
In addition, Interstellar was the most popular and talked-about foreign film in Korea in 2014. The sci-fi film held the 15th position in the North American box office standings with a modest USD 183.46 million in ticket sales. But the film became a huge hit in Korea by rawing over ten million viewers. Worldwide, Korea became the third most successful market for Interstellar after the U.S. and China. Its most critical success factor was the fact that scientific elements in the film traveled fast and actively via journals, the internet and social media, bringing about huge positive marketing effects for the film. The film was appealing to audiences with its edutainment function which stressed its scientific aspect. The strong word of mouth suggested audiences to watch the film in IMAX for the full experience, resulting in high occupancy rates of at least 90% in IMAX screens. A role in the film’s success was also played by Korean fans’ trust in its director Christopher Nolan. 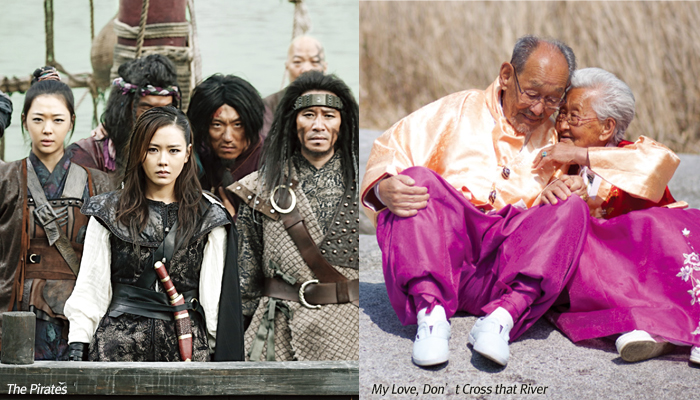 Preference for Franchise and Super Hero Films
Korean filmgoers continued to prefer Hollywood superhero films and franchise movies. The Korean film market positively received super hero films such as X-Men: Days of Future Past, The Amazing Spider-Man 2 and Captain America: The Winter Soldier and franchise films such as Transformers: Age of Extinction, Dawn of the Planet of the Apes, How To Train Your Dragon 2, The Hobbit: The Battle of the Five Armies and 300: Rise of an Empire . This went the same for the North American market. On the other hand, Edge of Tomorrow , Into the Storm, Noah, Exodus: Gods and Kings, Pompeii and Dracula Untold enjoyed strong responses solely in the Korean market. This phenomenon is an indication of Korean viewers’ steady preference for Hollywood’s spectacle films.
Growth of Diversity Films and Artbusters
Diversity films also won popularity in 2014. The Korean Film Council (KOFIC) assigns the title of ‘diversity film’ to works after reviewing their quality and artistic value at the request of the film’s distributor or producer. Diversity films are usually distributed via smallscale distribution networks. But sometimes, viewers’ positive responses put them on major distribution networks. Such rare cases took place many times in 2014. An example is the Korean independent documentary My Love, Don't Cross that River. This film topped Korea’s all-time box-office chart of diversity films by drawing 4.5 million veiwers. The film is currently still showing in theaters. Among foreign diversity films, Begin Again performed much better in Korea (USD 25.87 million) than in the North American market (USD 16.11 million), attracting 2.7 million spectators, while The Grand Budapest Hotel and Her inked higher scores than expected. European films such as The 100 Year Old Man Who Climbed out the Window and  Disappeared (Sweden), Attila Marcel (France) and Hector and the Search for Happiness (the U.K, Germany and others) became boxoffice hits, taking initiative in this new boxoffice trend. This trend created a new term called ‘artbusters’. On the other side, few Korean independent films earned popularity except for My Love, Don ’t Cross that River. Han Gong-ju and A Girl at My Door received attention from critics but failed to record high box-office scores. This exemplifies a structural weakness of Korean cinema devoid of a iddle zone between mainstream commercial films and low-budget films.
A Genre Imbalance
A list of Korean hit films shows that they are largely divided into two genres. One is period films, which is now a blockbuster genre that costs the largest amount of capital and earns the biggest profits in Korea. A total of six Korean period films premiered in 2014. Among them, four made the ten most commercially successful Korean films list. The other is ‘men’s films.’ They are crime, action and thriller films, dramas or melodramas that focus on male lead characters. Masculinity is embodied in Tazza: The Hidden Card, The Divine Move, A Hard Day, The Target, Man in Love, The Con Artists and Haemoo in the Korean film market. Among romantic films and comedies, Miss Granny and My Love, My Bride recorded meaningful performances. This imbalance in terms of genres continues in the Korean film industry today. 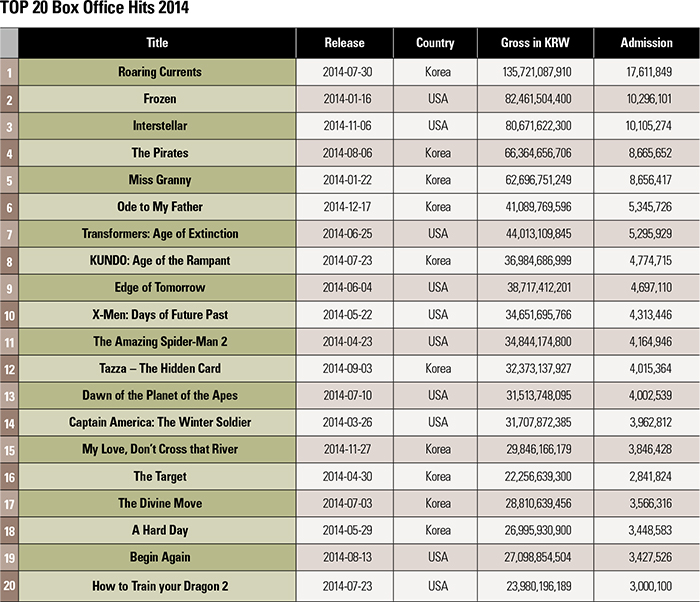