Dec 27, 2019
PARASITE Director and Star Honored by Ministry of Culture, Sports and Tourism 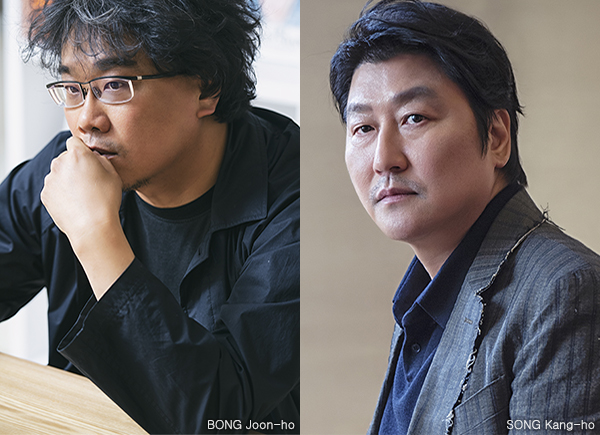 BONG Joon-ho and SONG Kang-ho, the director and star combo of critical hit PARASITE, have received Orders of Cultural Merit from the Korean government.
The Ministry of Culture, Sports and Tourism awarded the Eungwan Order of Cultural Merit to BONG, which is their second highest prize, and the Okgwan Order of Cultural Merit, the fourth highest classification, to Song.
Director BONG has long been one of Korea’s most acclaimed filmmakers, and has increasingly drawn international renown for his works, including the acclaimed drama Mother (2009) and the Netflix-backed film Okja. SONG has long been one of Korea’s box office top stars, after helping to lead diverse works such as Swiri (1999), Joint Security Area /JSA (2000), The Attorney (2013) and A Taxi Driver (2017) to glory. The pair have worked together three times before, on the acclaimed serial killer thriller Memories of Murder (2003), the monster movie hit The Host (2006) and sci-fi film Snowpiercer (2013).
PARASITE debuted earlier this year at the Cannes Film Festival, where it became the first ever Korean film to win the Palme d’Or. It went on to great success around the world, welcoming over 10 million spectators in Korea and generating over USD20 million in revenue at the American box office to date. It is currently a top contender for major prizes at the Academy Awards. Recently it became the first Korean film to secure nominations at the Golden Globes for Best Director, Best Screenplay and Best Foreign Language Film.
Among Korean filmmakers, Director KIM Ki-duk previously earned the Eungwan Order of Cultural Merit in 2012 after winning the Golden Lion at the Venice International Film Festival for Pieta (2012), and PARK Chan-wook was given the third-highest accolade, the Bogwan Order of Cultural Merit, after securing the Grand Prix (2010) at the Cannes Film Festival, in 2004 for his film Old Boy (2003).
Any copying, republication or redistribution of KOFIC's content is prohibited without prior consent of KOFIC.
Related People Related Films Related News