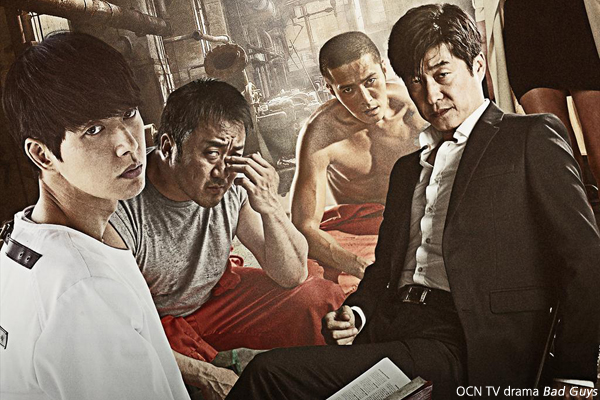 A feature-length adaption of the popular OCN cable action drama Bad Guys, originally broadcast in 2014, Bad Guys: The Movie (working title) will see stars KIM Sang-, Don LEE (aka MA Dong-) and KANG Ye-won reunite for a big screen adventure. Also along with the ride will be new additions KIM A- and JANG Ki-yong.
KIM Sang-, whose most recent film credits include the Hong films The Day He Arrives (2011) and Our Sunhi (2013) is back as Oh Gu-, a detective who often resorts to excessive force. With the permission of police inspector Yoo Mi-young played by KANG Ye-won of INSANE (2016), he sets up a special task force that employs the help of convicts. Currently, on a hot streak that includes THE OUTLAWS (2017) and the currently-in-theaters Along with the Gods: The Last 49 Days, Don LEE will reprise his role as Park Woong-, an incarcerated mob boss who joins OH’s team.
HAN Jung-hoon, the scribe of the original drama, returns to pen the screenplay of the feature adaptation. Handling the directors’ reigns will be SON Young-ho, who previously made the revenge thriller The Deal (2015).
Bad Guys: The Movie kicks off production in September and is aiming to hit theaters in 2019.
Any copying, republication or redistribution of KOFIC's content is prohibited without prior consent of KOFIC.
Related People Related Films Related News