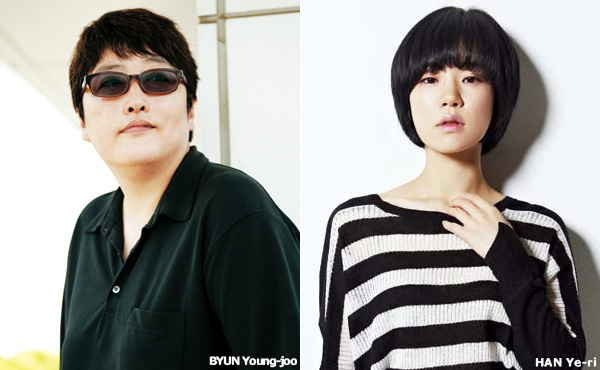 BYUN Young-joo and HAN Ye-ri are going to host the opening ceremony of the 15th International Women’s Film Festival in Seoul, which is going to take place at screen M of Mega Box Sinchon on May 24. BYUN, as one of Korea’s representative female directors made Helpless in 2012. Since debuting with the documentary film Habitual Sadness in 1995, she has directed several films including Ardor (2002) and Flying Boys (2004). She became a hit filmmaker when Helpless, a mystery thriller starring KIM Min-hee and LEE Sun-kyun attracted 2.4 million viewers and won the award for the female filmmaker of the year last year. She was a jury member at IWFFIS in 2008, where she directed a segment of ‘Ten Ten’ an omnibus project in commemoration of the 10th aniversary of the festival. She emceed the opening ceremony of the ceremony last year and is going to continue the connection this year.
HAN won the New Actress Award at the 49th Paeksang Arts Awards held on May 29. She received highlight when appearing in As One with HA Ji-won and BAE Doo-na, and also in South Bound with KIM Yun-seok and OH Yeon-su. Later this year, she is going to meet audiences through Commitment directed by PARK Hong-soo and Kundo: Age of the Rampant directed by YOON Jong-bin. She performed in the trailer for this year’s edition and will conduct the opening ceremony of the festival. The 15th IWFFIS will be held from May 24-30.