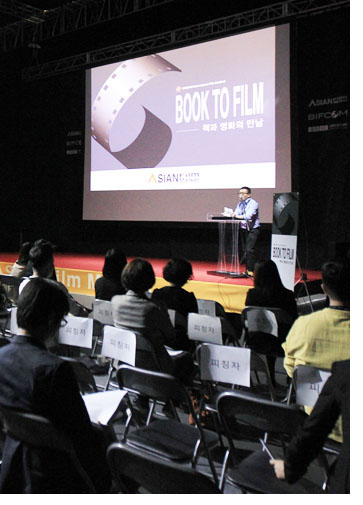 Asian film market that started on Oct. 8 was able to successfully close on Oct.11. This year’s market held at BEXCO has satisfied attendants with upgraded facilitation and operating system resulting in registration of 690 companies and 1,098 badges, an increase from last year which ended with 585 companies and 1080 badges. Moreover, total of 32 countries 181 companies and 96 booths were made including BIFCOM and around 2,635 buyers and film makers have paid visits on the opening day of the market.
CJ Entertainment’s Masquerade, Deranged, Perfect Number, Spellbound, Showbox’s The Thieves, A Company Man, and Mirovision’s Our Homeland, Melo, Stateless Things, 9er Entertainment’s Never Ending Story, Sunday Punch have made sales deals. The festival has estimated approximately 70 films have made deals during this year’s Asian Film Market.
Not only the Korean films, films from CMG of US, Solar Media and Beta Cinema of Germany, Celluloid Dreams and Le pact of France have made sales to a numerous Asian countries. As for the market screenings, compared to last year’s 60 films, 70 films from 16 countries were screened 80 times.
40 premieres were held, 5 titles increased from last year and the number of screens has also increased from 64 to 80 this year. Online screening which has been serviced for 3 years from 2010, 281 films have registered this year, 23 more from last year, providing more comfortable environment for the participants to enjoy the films. What caught more attention was 180 films that were chosen by BIFF have been posted on online screening.
Newly made programs, BOOK TO FILM and BFC project pitching were also held successfully. Among the 10 books from BOO TO FILM, PARK Sung-kyung’s Easy Girl, KANG Tae-sik’s Goodbye, Zoo, and NORIZUKI Rintaro’s For Yoriko have gottend several meeting requests.
Asian Project Market, held during the same period as Asian Film Market was also able to arrange meeting with investors. KOFIC Industry Forum with the them of ‘international co-production’, organized by Korean Film Council for the first time was also successfully finished with various seminars presentations, business meeting and pam tours(Refer to KOFIC NEWS for more information on KOFIC Industry Forum).
Any copying, republication or redistribution of KOFIC's content is prohibited without prior consent of KOFIC.
Related Films