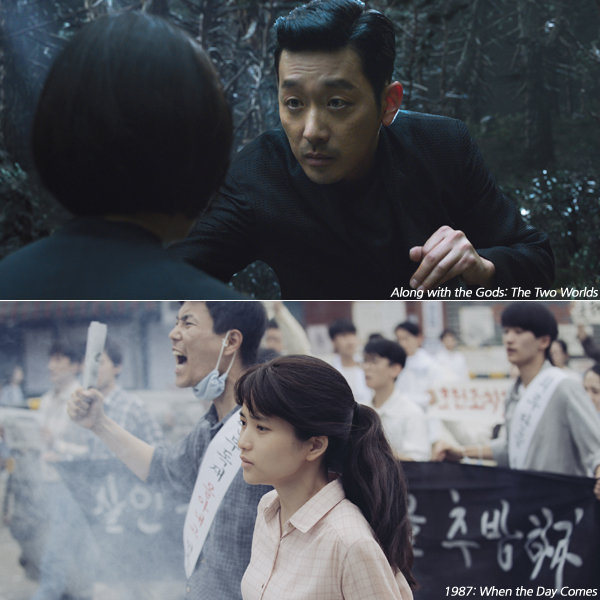 The Korean box office figures for January 2018 were released. Although Korean films like Along with the Gods: The Two Worlds (2017) and 1987: When the Day Comes (2017) did well in January, the total sales of the Korean film industry retreated slightly, according to the January 2018 Report on the Korean Film Industry by the Korean Film Council (KOFIC, Chairman OH Seok Geun).
According to the report, the number of attendees and the total sales in January 2018 22.94 million and USD 171.6 million, respectively. The number of audiences declined by 310,000 or 1.3% from the same time last year, while total sales decreased by USD 5.3 million (3.0%). Fortunately, the box office successes of domestic films like Along with the Gods: The Two Worlds, 1987: When the Day Comes and Keys to the Heart led to a 61.3% market share. In January, the number of domestic film viewers was 14.06 million, up 10% from a year ago while ticket sales were USD 10.56 million with an increase of 8.8%. However, despite good performances from Disney’s animated film Coco and fantasy action movie Maze Runner: The Death Cure, the number of foreign film viewers and ticket sales were 8.88 million and USD 66 million, taking only 38.7% market share. This was a decline of 16.0% and 17.4% from a year ago.
Of the top ten grossing movies, five were Korean movies and the rest were from Hollywood. Korean fantasy blockbuster Along with the Gods: The Two Worlds topped the box office, collecting 5.51 million moviegoers, followed by Korean political drama 1987: When the Day Comes with 5.16 million moviegoers. Disney’s Coco and Korean family drama Keys to the Heart came in third and fourth places, attracting 2.73 million and 2.29 million filmgoers, respectively. However, franchise films such as 20th Century Fox Korea’s Maze Runner: The Death Cure and Sony Pictures’ Jumanji: Welcome to the Jungle didn’t meet expectations in Korea. In the specialty films category, bestseller-based movie Wonder (2017) and Jim Jarmusch’s Paterson (2017) took first and second places, bringing 151,000 and 29,000 moviegoers. Among low-budget domestic movies, documentary films Myeoneuri: My Son's Crazy Wife and For Vagina’s Sake sold 7,000 and 5,000 tickets, respectively.
Any copying, republication or redistribution of KOFIC's content is prohibited without prior consent of KOFIC.
Related People Related Films Related Company