Oct 24, 2017
Successful Event Welcomed Film Professionals from Around the World 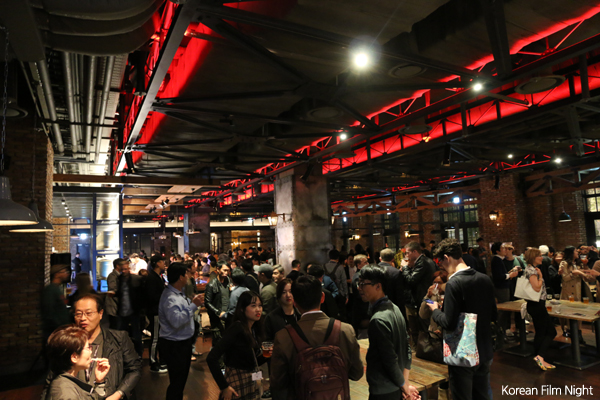 Korean Film Night was successfully held at the 22nd Busan International Film Festival (BIFF). Korean Film Night was organized by the Korean Film Council (KOFIC) which announced through a press release on the 20th  “the Korean Film Night reception was successfully held on October 16th at Devil’s Door of Shinsegae Centum City Mall.”
Korean Film Night is a yearly event during BIFF that is open to all global industry professionals. It is a gathering to celebrate and congratulate the success of Korean films. KOFIC quoted, “This year, we made sure that the event was welcoming to anyone in the industry and it was very popular among the guests.”  At this year’s event, BIFF’s Co-Director KANG Soo-yeon, jury of New Currents section, Oliver Stone, director Bahman Ghobadi, jury of the Kim Ji-seok awards and critic, Tony Rayns, Darcy Paquet, Korean Cinema Award winner and Berlin Forum chief, Christoph Terhechte, Tokyo FilmeX’s director Hayashi Kanako, Cannes’ Directors' Fortnight, China’s Wanda Group, and Japan’s Shochiku were among the 700 or so attendees. KOFIC also added that there were major guests from BIFF, as well as young Asian filmmakers from the Asian Film Academy and Platform Busan.
Along with Korean Film Night, KOFIC also organized diverse events throughout BIFF. From October 14th to the 17th, they ran the Korean Film Center at the Asian Film Market in BEXCO Exhibition Center 2. They supported 11 Korean international sales agencies and technical service companies to attend the market, and selected 10 co-production projects where 40 industry professionals from China, Japan, Europe and Southeast Asia were invited to have meetings at KO-production in Busan 2017. In addition, they ran a campaign called “Movie Hero” at the BIFF Village which promoted legal online distribution. KOFIC mentioned, “We’re making diverse approaches in order to get the message out not just to film industry professionals, but to make it accessible to regular theatergoers as well.”
Any copying, republication or redistribution of KOFIC's content is prohibited without prior consent of KOFIC.
Related Company Related News