PARASITE Maintains Its Hold on the Charts 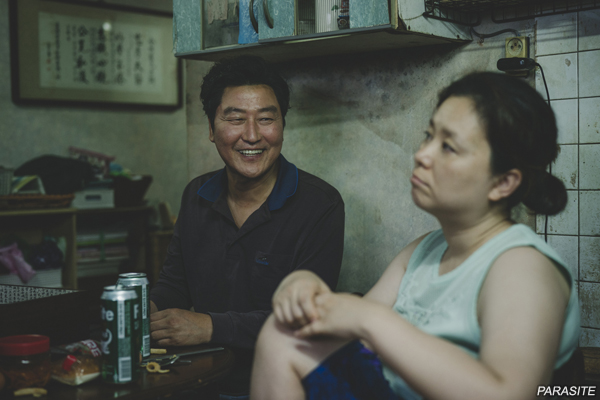 As the media frenzy around Korea’s first ever Palme d’Or winner cooled down, so did the box office as business receded about 20% with 3.34 million tickets sold. The local market share also declined but maintained a razor thin 50.1% majority despite the presence of several Hollywood tentpoles.
Following its phenomenal debut last week and some terrific mid-numbers, the furor around BONG Joon-ho’s PARASITE has finally started to subside, which amounted to a 40% slide in its sophomore weekend. With 1.67 million viewers (USD 12.4 million) recorded, that was still more than enough for first place for the acclaimed film, which has now recorded in 7.02 million admissions (USD 51.06 million), which is the third best ever total in Director BONG’s career, behind The Host (2006 - 13.02 million viewers) and Snowpiercer (2013 - 9.35 million viewers).
Remarkably rising 49% in its third weekend was Disney’s Aladdin with 1.1 Million entries (USD 8.04 million) as it continues to draw in new audiences. The word-of-mouth smash hit has so far reached 3.9 million spectators (USD 27.87 million). The film has even managed to climb back to the top of the reservations chart, pushing PARASITE down to second place.
Opening in a distant third place with 368,000 sales (USD 2.82 million) and 737,000 tickets (USD 5.59 million) sold over its first five days was X-Men: Dark Phoenix.
On rerelease, MIYAZAKI Hayao’s beloved Japanese animation My Neighbor Totoro filled 63,000 seats (USD 439,000) over the weekend and attracted a total of 101,000 viewers (USD 705,000) since opening on Thursday.
The Elton JOHN bio-pic Rocketman had a lackluster debut in fifth place with 39,000 entries (USD 296,000) and a total of 72,000 viewers (USD 534,000) since opening on Wednesday.
While Aladdin and PARASITE should continue to perform well this coming weekend, the chart will also welcome a pair of Hollywood titles, the reboot Men in Black: International and The Upside, a remake of the French film The Intouchables, which was a massive hit in Korea in 2012 with over 1.7 million admissions.
Any copying, republication or redistribution of KOFIC's content is prohibited without prior consent of KOFIC.
Related People Related Films Related News