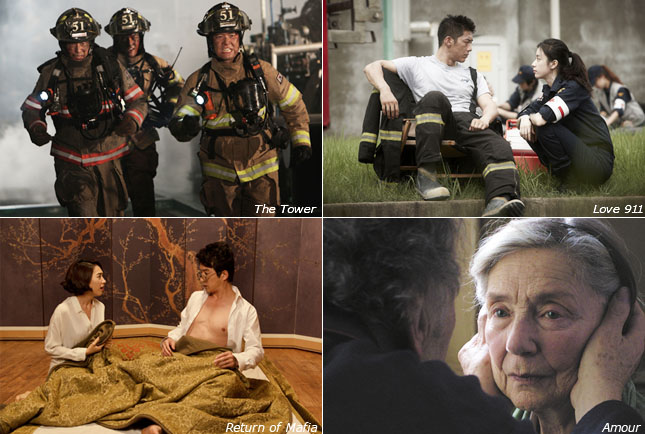 With the peak holiday season well underway, two films in particular are racking up impressive totals at the Korean box office: the Hollywood film Les Misérables, adapted from the popular musical, and local blockbuster The Tower. In the two-week period from December 20 to January 2, Les Misérables attracted a massive 3,256,240 viewers, amounting to more than US $20 million. The star-studded film is continuing to perform strongly, and is expected to add significantly to its total in the coming weeks.
Selling tickets at an even faster pace was the firefighting drama The Tower from director KIM Ji-hoon. Featuring stars SOL Kyung-gu, SON Ye-jin, KIM Sang-kyung and KIM In-kwon, the film centers around a deadly fire that breaks out on Christmas Day, during the opening of a massive twin-towered luxury skyscraper in central Seoul. As attendees of the opening party struggle to avoid the flames, some of Seoul's top firefighters rush to the scene. The film itself also opened on Christmas, selling 430,000 tickets on that day and 2,591,898 tickets by January 2.
The robust performance of The Tower marks a slight revival of fortune for big-budgeted ($10 million+) Korean genre films in general, which have been responsible for a string of expensive flops in recent years including air force drama R2B, war film My Way and monster movie Sector 7 -- which incidentally was also directed by KIM Ji-hoon.
Meanwhile despite the dominance of the two abovementioned films, several other works have managed to amass significant totals during the holiday season. At #3 in the chart is Korean drama Love 911, a romance featuring top stars KO Soo and HAN Hyo-joo as emergency medical workers. Opening on December 19, the film sold 1,716,127 over the past two weeks thanks in part to the popularity of its lead actors. At #4 was Peter Jackson's The Hobbit: An Unexpected Journey, which added a further 1,153,041 admissions to its score for a running total of 2.7 million admissions.
Also hanging on was gangster comedy sequel Return of Mafia, the fifth installment in a series that began in 2002 with the runaway hit Marrying the Mafia. Despite tepid reviews the film sold 907,109 tickets for distributor Lotte Entertainment. The film's plot revolves around a succession crisis in the mafia family when three of its leading members decide to go legit.
Children's animated films filled up much of the rest of the chart, with Hollywood feature Wreck-It Ralph landing at #6 with 560,484 admissions, followed by European coproduction Niko 2 Little Brother, Big Trouble at #8 with 296,783 admissions; South African-US coproduction Zambezia at #9 with 291,273 admissions; and Japanese Pokemon installment Gekijoban Pocket Monster Best Wishes! Kyurem vs Seikenshi Keldeo at #10 with 242,328 admissions.
Elsewhere, followers of arthouse cinema were heartened by the performance of Michael Haneke's Palme d'Or winner Amour. Since opening in Korea on December 19, the film has sold 27,808 tickets on a total of 29 screens. This is an unusually strong performance among small-scale specialty works, and the film is likely to enjoy a long, if limited, run in theaters.
Any copying, republication or redistribution of KOFIC's content is prohibited without prior consent of KOFIC.
Related People Related Films