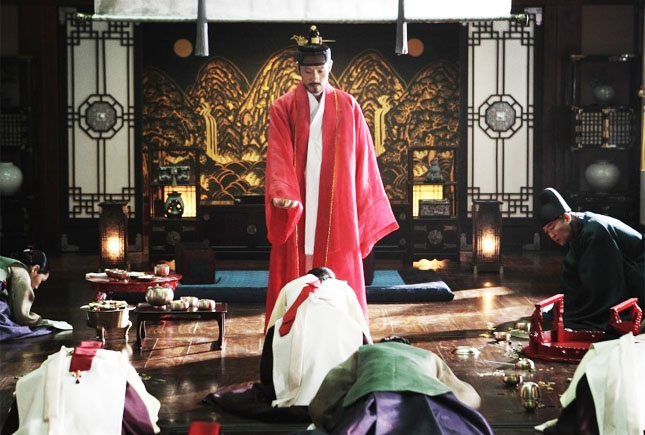 A tremendous performance during the extended Chuseok lunar holiday helped the Korean period drama Masquerade to run far ahead of its rivals at the box office. From the two-week period from September 20 to October 3, which represents the film's second and third weeks on release, Masquerade pulled in a massive 5.4 million tickets to bring its overall totals to 7.2 million admissions. After passing The Avengers, it now ranks as the second highest grossing film of the year, and it is now increasingly likely that it will become the second film of the year after The Thieves to cross the 10 million admissions mark.
The film stars LEE Byung-hun in a dual role as the Joseon Dynasty king Gwang-hae and a jester recruited to serve as his body double. LEE’s performance in particular has been singled out for praise, but overall Masquerade is getting extremely high marks from both critics and general audiences. Currently the film scores 9.33 points out of 10 in viewer ratings at portal site Naver. It proved to be the perfect film for the Chuseok holiday, when Korean citizens visiting their families often take time to visit the movie theater. In fact, its one day total of 744,000 tickets on Monday, October 1 is vastly higher than any of its Saturday or Sunday scores.
Three other films also performed respectively over the holidays. The French-produced Taken 2 took close to 1.8 million admissions to land at #2 in the chart, following in the footsteps of the original film which sold 2.4 million admissions back in 2008. The latest animated feature from Pixar, The Brave, appealed to family audiences and took 760,000 admissions in one week. In addition, the Korean film The Spy amassed 1.2 million admissions in two weeks, which hardly ranks as a failure, but distributor Lotte Entertainment may have been expecting more after the success of lead actor KIM Myeong-min’s previous film Deranged over the summer. The film examines the daily life of a North Korean spy living in the South in the present day.
Elsewhere in the chart, KIM Ki-duk’s art-house feature Pieta continued to perform well in the aftermath of its Golden Lion win in Venice. With generally positive reviews, the film added 170,000 tickets over the two-week period to bring its total to 592,848 admissions. Director KIM has announced that he is voluntarily pulling the film from release as of October 3 in order to give additional screen time to other art-house films, so presumably the figure cited above will stand as its final tally.
Other art-house specialty films currently on release include Sarah POLLEY's Take This Waltz, which took 12,121 at admissions on 21 screens in a single week; Indian film Taare Zameen Par/Like Stars on Earth which has taken 18,052 admissions since its September 6 release; Wim WENDERS’ 3-D Pina which has grossed 16,514 admissions since August 30, and Woody Allen: A Documentary, which has taken 2,551 admissions on 17 screens in a single week.
Finally, CHOI Dong-hoon’s The Thieves entered the record books at 2:00pm on October 2 when it passed the all-time box office mark for Korean cinema, held previously by BONG Joon-ho’s The Host. BONG’s film had held the record since 2006 with 13,020,393 admissions. The overall record continues to be held by James Cameron's Avatar with 13,624,328 admissions, a level that The Thieves is unlikely to reach. 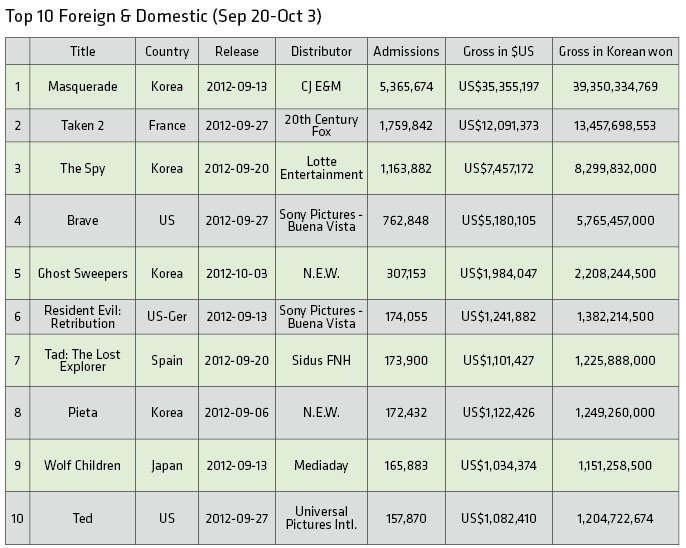 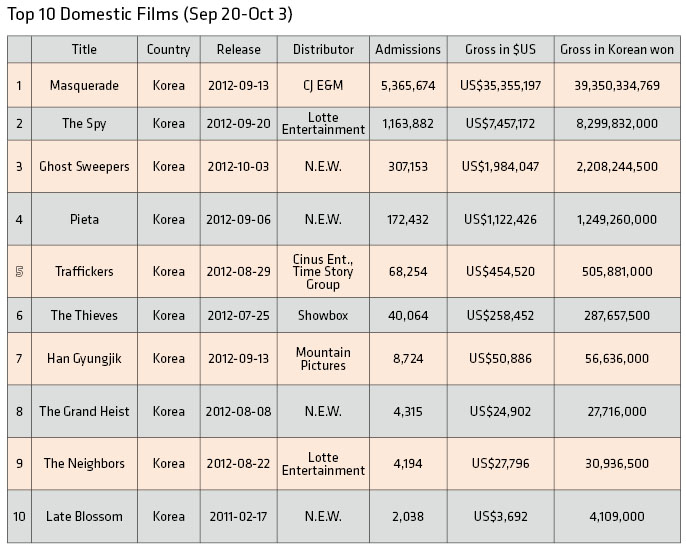