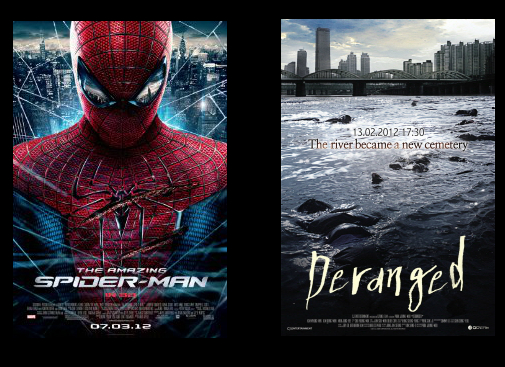 Two films -- one Korean, one from Hollywood -- combined for a commanding 76% of the box office in the first half of July. Pandemic thriller <Deranged> and Hollywood blockbuster <The Amazing Spider-Man> each grossed an almost identical 3.2 million admissions over the two-week period, while the films in the #3-#10 slots remained far behind, selling between 140,000 and 240,000 tickets each.
The tremendous box office performance of <Deranged>, which ranks #1 by admissions but #2 in revenues due to 3-D pricing for <Spider-Man>, took many industry observers by surprise. Written and directed by PARK Jeong-woo (<Dance with the Wind>), the film is the story of an ordinary Korean father who, together with the rest of the nation, is forced to confront a deadly cocktail of bioterrorism, mass panic and genetically modified parasites. Veteran actor KIM Myeong-min (<Detective K>, <Closer to Heaven>) plays the lead role of a medical supplies salesman whose wife and children have become infected. Also appearing in the cast are actress MOON Jeong-hee (<Cafe Noir>) as his wife; singer/actor KIM Dong-wan (<Spin Kick>) as his police detective brother; and LEE Honey (<Hit>) as a researcher at the Korea National Institute of Health.
Leading distributor CJ E&M will be pleased to have a major hit on its hands after a somewhat disappointing 2012 to date. <Deranged> performed even stronger in its second weekend then in its first, rocketing past the 3 million admissions mark in only 10 days. With a midsized budget of 5 billion won (~$4.4 million), the film has already moved well beyond its break-even point of 1.8 million admissions. Although it will face strong competition in the coming weeks from <The Dark Knight Rises> and anticipated local caper film <The Thieves>, it appears to have an excellent chance of becoming the best-selling Korean film of the year so far.
Two other Korean films made their debut on July 12, edging their way onto the chart despite having only four days worth of box office returns. At #4, horror film <Two Moons> made a decent but not spectacular start with 240,000 tickets sold in its opening weekend. The film stars PARK Han-byeol, KIM Ji-seok and PARK Jin-joo as three people -- a horror novelist, a university student, and a high school girl -- who wake up in a strange house with no memory of how they got there. Veteran director KIM Dong-bin is no stranger to the horror genre, having previously directed the films <Red Eye> (2004) and <The Ring Virus> (1999).
Also of note was the performance of low-budget comedy <Dangerously Excited> at #9. The film features noted character actor YOON Je-moon in a leading role as a public servant whose life is turned upside down by a group of indie musicians. Directed by KOO Ja-hong (<The Wolf Returns>), the film cost only 200 million won ($175,000) to make, so that its four-day total of 157,000 admissions puts it on the verge of turning a profit. The film was given a surprisingly wide release by local distribu tor N.E.W., as an example of counterprogramming during the peak summer season.
Other examples of counterprogramming in this month include the Japanese animated film <A Letter to Momo>, which successfully targeted family audiences to land at #3 with 243,000 admissions; and Woody Allen's <Midnight in Paris>, which failed to replicate its tremendous box office success in North America, but which nonetheless sold close to 200,000 tickets. This appears to be the highest gross of any Woody Allen film from the past decade.