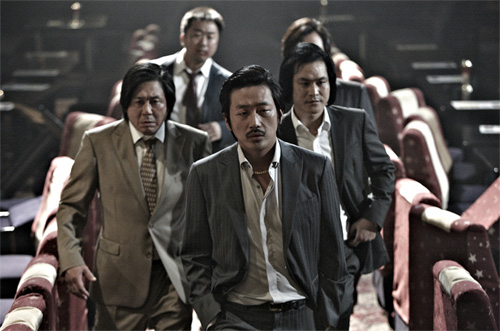 In the first two weeks of February, Korean films from the Lunar New Year holiday in late January kept going strong. <Nameless Gangster: Rules of the Time>, which opened Feb. 2, clocked up 918,000 admissions in its first week and has in two weeks gathered 2.5 million admissions in total to land at the #1 ranking of this chart.
For director YOON Jong-bin (who debuted in 2005 with the Cannes entry <The Unforgiven>), this is a comeback after nearly four years since <Beastie Boys> (2008) with HA Jung-woo.<Nameless Gangster: Rules of the Time> stars CHOI Min-shik and Ha Jung-woo in a film noir set in Busan in 1982.
Corrupt customs officer CHOI Ik-hyun (Choi) finds a methamphetamine shipment and partners with the harbor city’s biggest crime organization boss, CHOI Hyung-bae (Ha), to make money off it. They eventually find out they are distant relatives. With his unique wit and ability to make people like him, Ik-hyun borrows Hyung-bae’s power to take over Busan.But their golden days are numbered. In 1990, the ROH Tae-woo administration declares a war on crime and a rift gradually occurs between the two men and in their organization. With a “Teenager restricted” rating and a rather long running time of 133 minutes, the film has elements working against it for box office success. Despite that, “the return of” Choi Min-shik melded with top-rated actor of the day Ha Jung-woo is impressive. The two actors’ presence is backed up by a solid supporting cast, giving the film a distinct flavor of a gangster classic.
As of Feb. 14, the film has a high reservation rate at 27.3% and no particular competitors, and so <Nameless Gangster> is expected to keep performing well at the box office.
Lunar New Year’s box office leaders <Dancing Queen> and <Unbowed> have both passed the 3 million admissions marker.
Korean 3D animation <Speckles: The Tarbosuarus> sold 360,000 tickets in its first week and has of Feb. 14 clocked up a total of 800,000 admissions. With more than KW8 billion (US$7.1 million) invested over three years, the animation clocked up unexpectedly high box office thanks to the spring break and families coming out to cinemas in a body.
On the weekend of Feb. 3 – 5, Korean films took the top five spots in the box office chart - <Nameless Gangster>, <Unbowed>, <Dancing Queen>, <Speckles: The Tarbosuarus>, and <Papa>, in that order from #1 to #5. Much anticipated films <War Horse> and <Tinker, Tailor, Soldier, Spy>, which opened Feb. 9, took in 470,000 and 420,000 admissions respectively in their first week.
Any copying, republication or redistribution of KOFIC's content is prohibited without prior consent of KOFIC.
Related People Related Films