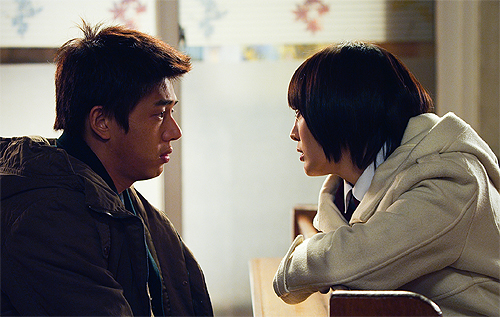 Local hit <Punch> continued to dominate the box office in the first two weeks of November. A character-centered drama about a high school boy and his teacher who lives next door, director LEE Han’s film has been enjoying buoyant word of mouth, thanks largely to the performances of YOO Ah-in and KIM Yun-seok. Adding another US$12 million to its totals in the past two weeks, the film distributed by CJ E&M has now amassed 3.7 million admissions overall for a total gross of approximately US$23.5 million.
Meanwhile four other Korean films that were released in November found their way into various slots in the chart. <Couples>, released Nov. 2 by Sidus FNH, sold 326,894 tickets in 14 days to land in the #4 ranking. A remake of the 2004 Japanese film <A Stranger of Mine> by UCHIDA Kenji, the film starts off like an ordinary romantic comedy but soon transforms into something more complex. Lotte Entertainment release <You’re My Pet>, which sold 209,318 tickets in only five days, is also based on Japanese source material - in this case, a manga of the same title. Featuring popular star JANG Geun-seok and KIM Ha-neul, the film tells the story of a woman who adopts a young man as her pet.
Other new Korean films include <Penny Pinchers>, a romantic comedy about a desperately poor unemployed man (SONG Joong-ki) taken in by his neighbor (HAN Ye-sul), a young woman obsessed with saving money; and <Mr. Idol>, a film about a pop star which struggled to earn the attention of viewers, selling only 63,376 tickets in 13 days.
As for imported titles, four films from Hollywood came in at #2, #3, #6 and #9. Performing the best once again was the robot boxing/family drama <Real Steel>, which has shown real staying power and sold close to 3 million tickets overall. Also opening strongly was <Immortals>, taking 684,615 admissions in only five days. Finally, despite its #1 performance in the US, novel adaptation <The Help> has taken only modest returns in Korea, although word of mouth among people who have seen the film is strong.
Nov 18, 2011
Any copying, republication or redistribution of KOFIC's content is prohibited without prior consent of KOFIC.
Related People Related Films Related Company