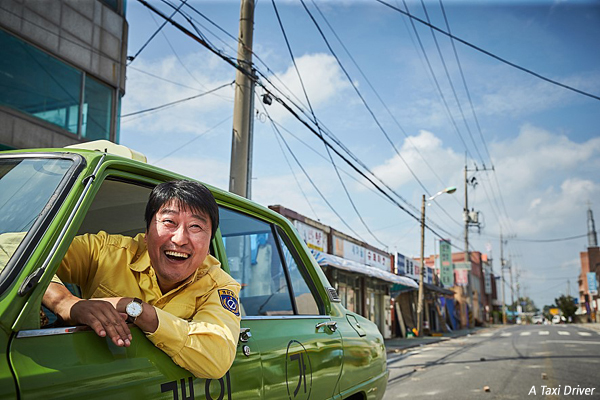 A Taxi Driver picked up several awards and accolades at the 3rd edition of Asia World Film Festival.
Director JANG hun’s touching, historical action drama about a Seoul taxi driver who escorts a German correspondent to Gwangju to cover the democracy protests of 1980 won the festival’s Snow Leopard Best Picture Award for best film. In addition, the film was given the “Dr. KIM’s ‘He Can Do She Can Do Why Not Me’ Humanitarian Award” which included a cash prize of $10,000 USD. The festival also gave the film’s lead actor SONG Kang-ho a special mention for his “Dynamic, intricate and compelling performance.”
The Asia World Film Festival takes place in Culver City, California and typically limits its selection to films that have either been chosen as Oscar or Golden globe nominees by their respective countries, or that have earned critical acclaim on the festival circuit. The festival was established to strengthen ties between the Asian and Hollywood film industries and to draw greater recognition to Asian filmmakers. This year’s edition was held from October 25th to November 3rd and screened 37 films from 22 countries.
A Taxi Driver has been a hit worldwide. The movie was selected as the opening film for the Korean film festivals of Brussels, Paris, Spain, Frankfurt, and Hungary and picked up the best actor award at the Fantasia International Film Festival (Montreal). Domestically the film has been a blockbuster, having so far sold 12 million tickets and earning major nominations for Korea’s Blue Dragon, Grand Bell, and Buil Film Awards.
Any copying, republication or redistribution of KOFIC's content is prohibited without prior consent of KOFIC.
Related People Related Films Related News