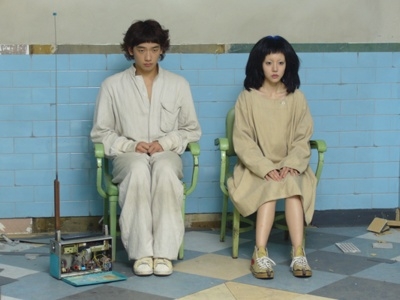 With the release date of December 7 drawing near, the already high - anticipation for I'm a Cyborg, but that's Ok steadily builds-up and makes its renowned writer/director PARK Chan-wook a much sought after man by the media.

"Believe it or not, I made this film," PARK was quoted saying after being asked about I'm a Cyborg, but that's Ok's great departure from his previous violent vengeance trilogy.

His next upcoming film is a romantic comedy, but the protagonists are mental patients in a mental hospital. PARK who studied philosophy said that the film deals with the "purpose of existence", but rather than letting rational thinking people like doctors determine what and how, he explores "how to live" and love through a girl who thinks she's a cyborg and a boy who believes that he can steal human qualities.

LIM Soo-jung plays the female lead and the boy is played by JUNG Ji-hoon, better known as the popular singer Bi (Rain).

PARK also added his personal touch in the art direction. He abandoned the standard mental institute's representation as a clinical setting for a colorful place, because this way the "film's style supports the story and the characters".

Even though PARK made a romantic film suitable for children, the film's characteristics seem to reflect his acclaimed personal style from his previous films: non-standardized characters, story and style, complemented with touches of humor.