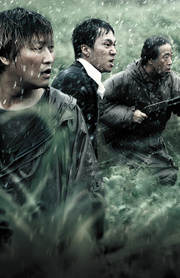 One of America's leading film magazines Premiere included the Korean film The host in their Fall's 75 Must-See Movies in their U.S. edition. The list of 'must-see' films this fall is quite extensive, but consists almost entirely of Hollywood films. The few exceptions besides The Host are the Chinese Fearless starring Jet Li and the European The Science of Sleep directed by Michel Gondry.

French director Michel Gondry is already a well-known name in the U.S. and he's best known for directing The Eternal Sunshine of the Spotless Mind with Jim Carey and Kate Winslet as the leads. Jet Li has a fan-base in the U.S. for quite some time where he also starred in several films.

The Host's director BONG joon-ho, and the leading actors SONG Kang-ho and BAE Doo-na lack a similar kind of recognition in the U.S. However, the film's selection by numerous film festivals, and the consistent reception of praise from critics and audiences in North America have resulted in an upcoming U.S. release of The Host, making it visible for recognizing it as a 'must-see' film.

The Host is a monster film that includes many allusions to Korean society. The film broke numerous box office records and became Korea's most popular film.