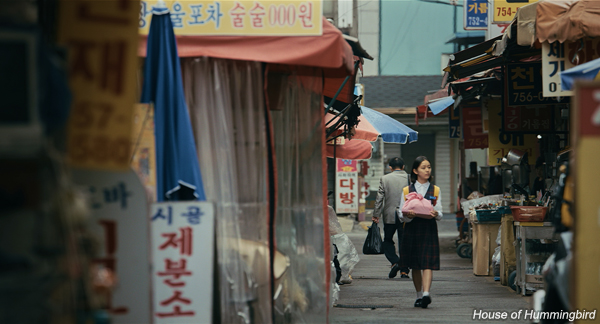 KIM Bora’s critically acclaimed debut film House of Hummingbird (2018) has continued its impressive festival run after winning three awards at this year’s Tribeca Film Festival in New York, including Best Film, Best Actress and Best Cinematography in the International Narrative Competition.
Best Actress went to PARK Ji-hu, who plays Eun-hui, a young adolescent dealing with family and relationship issues in Seoul circa 1994, while various major events in Korea unfold around her throughout the year. The film also stars indie darling KIM Sae-byuk (The Day After, 2017).
The jury in Tribeca commented that “In this beautiful film, a seemingly unexceptional girl is truly seen by another human being for the first time. Through that random connection, her perspective of herself, and hence her life, is transformed,” and go on to praise PARK for “a subtle performance of enormous range and complexity,” and cinematographer KANG kuk-hyun for “empathetic, patient, yet specific and assured cinematography which allows us to embark on a young girl’s journey as she comes to terms with who she truly is.”
The film has now won ten awards after screening at just six festivals, with plenty more festival dates planned in the near future, including the Seattle International Film Festival. House of Hummingbird debuted at the Busan International Film Festival in the New Currents competition, earning the KNN Audience Award and the NETPAC Award. This was followed by the SIFF Committee Award and the New Choice Award at the Seoul Independent Film Festival.
KIM’s work debuted internationally in the Generation 14plus section of the Berlin International Film Festival, where it won the Grand Prix for the Best Feature. It has also won the Golden Tulip for Best Film at the Istanbul Film Festival and a Special Mention from the Jury from Cyprus Film Days International Film Festival.
Any copying, republication or redistribution of KOFIC's content is prohibited without prior consent of KOFIC.
Related People Related Films Related Company Related News