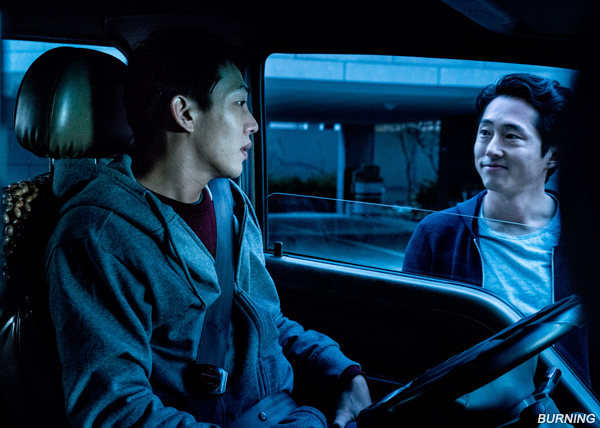 Director LEE Chang-dong added one more to his trophy chest after his critically acclaimed new film BURNING (2018) picked up the Best Foreign Language Film Award from the French Union of Film Critics earlier this month. The film beat out Shoplifters, First Man, The Guilty, Isle of Dogs and Phantom Thread for the award.
Based on a short story by MURAKAMI Haruki and starring YOO Ah-in (Veteran, 2015), Steven YEUN (Okja, 2017) and newcomer JUN Jong-seo, BURNING (2018) has been a hit with critics across the world. It recently earned the Best Foreign Language Film awards from the Los Angeles, Austin and Toronto Film Critics groups. Meanwhile YEUN has claimed the Best Supporting Actor prizes from the Florida, Los Angeles, Toronto and National Society of Film Critics Awards.
Coming eight years after his similarly acclaimed 2010 drama Poetry, LEE’s BURNING (2018) debuted in the competition at the Cannes Film Festival in May of last year, where it earned the FIPRESCI Prize and the Vulcan Award for the Technical Artist before being invited to a slew of international events.
Last month, BURNING (2018) became the first ever Korean film to make it to the shortlist of the Best Foreign Language Film category of the Academy Awards, although it ultimately failed to make it to the final five contenders, which were revealed on January 22.
Any copying, republication or redistribution of KOFIC's content is prohibited without prior consent of KOFIC.
Related People Related Films Related News