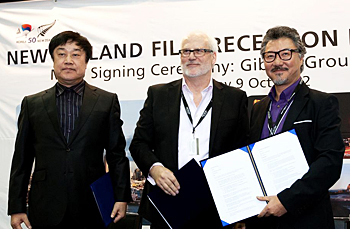 Gibson Group, a representative film production company in New Zealand announced that they signed a memorandum of understanding (MOU) for co-production with Cine 2000, Korean film production company that has made Whispering Corridors series and many other films. Gibson Group is New Zealand’s representative film production company that has produced and imported films and TV shows to 80 nations in the world.
They have co-production firms in Australia and Europe and this is their first cooperation with a Korean company. By signing the MOU, the two companies agreed to co-produce 3 films for the following 5 years focusing on sharing information about film industry of each country and collaboration in general.
The first film they will make together is The Graduation, which will be cranked in June next year. It will be shot in Northeast area of New Zealand and the post-production will be done in Korea.
Any copying, republication or redistribution of KOFIC's content is prohibited without prior consent of KOFIC.
Related Films Related Company