Lee Sun-mi wins Woman in Film of the Year 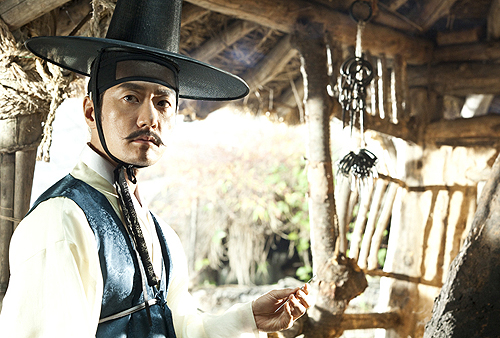 Women in Film Korea has announced producer LEE Sun-mi is the 2011 winner of the Woman in Film of the Year Award for her work on <Detective K: Secret of Virtuous Widow>. Other awards went to actresses SONG Hye-kyo and CHOI Ji-hee, director HAN Hye-jin, and producer UM Joo-yeong.
The Woman in Film of the Year Award goes to the woman with “the most excellent activities of the year” to encourage and support them. The organization noted that <Detective K: Secret of Virtuous Widow> took the solid story of its original and added cinematic tension and excitement to create a period piece that took in about 4.8 million cinema-goers. They continued to say that Lee was selected for this top honor for “presenting a Korean-style detective character” and “a new character entertainment film”.
Actress Song Hye-kyo won the Best Performance award this year for her performance in <A Reason to Live>. Directed by LEE Jeong-hyang, the film was previously known as <La Quotidienne>, a drama about a woman who forgives the boy who killed her fiancé and another (played by Song) who shoots a documentary on the death penalty. The awardee for best performance is selected by Women in Film members as well as internet voters.
The Contribution (or life time achievement) Award went to veteran actress Choi Ji-hee for her pioneering work as an actress in different genres including war films, action films, comedies and thrillers. Choi debuted in director LEE Kang-cheon’s 1958 film <A Beautiful Wicked Woman>at the age of 18 and often portrayed bold women who threw aside traditions to pursue their desires in films such as director YU Hyun-mok’s <Kim’s Daughters> and SHIN Sang-ok’s <A Sister’s Garden>. Prolific throughout the 1960s and 1970s, she also starred in a series of action films with PARK Nou-sik which included <Iron Man From Hong Kong>.
The directing/screenplay award went to Han Hye-jin and An Jae-hoon for the animation <Green Days> and the producing award went to Um Joo-yeong for the thriller<Children…>, directed by LEE Kyu-man.
These and other awards will be presented at the Women in Film ceremony on the evening of Dec. 15 at CineCode Sonje in Seoul.
Dec. 14, 2011
Any copying, republication or redistribution of KOFIC's content is prohibited without prior consent of KOFIC.
Related People Related Films