Jan 23, 2017
Winners of 2016 Animation Scenario Contest Were Announced at the Ceremony 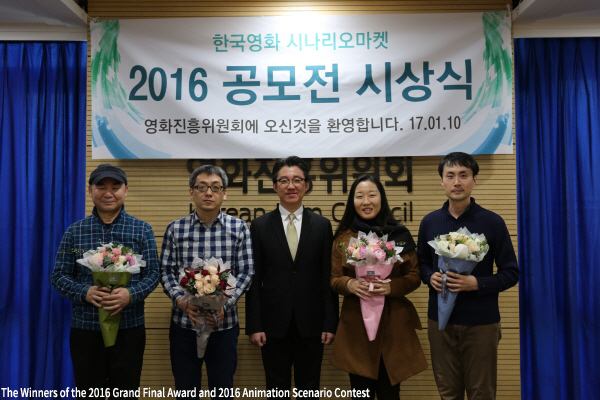 Korean Film Council (KOFIC)’s Korean Film Scenario Market held the 2016 Grand Final Award ceremony on January 10th. The winners are PARK Chul-hwan of Crime Scene Investigation and LEE Joo-yeon of Mailbox in front of Dosan Station. Crime Scene Investigation was well received for its potential to be made a commercial movie with stable layers and charming characters, while Mailbox in front of Dosan Station has a thoughtful subject and excellent plot.
Grand Final Award is a scenario competition which decides its winners among Korean Film Scenario Market’s monthly recommendations after further development like mentoring. It started in 2014 to encourage screenwriters to continue their works.
Korean Film Scenario Market (www.scenariomarket.or.kr) is run by KOFIC since 2006 to lower the entry barrier to Korean film industry and to supply new scripts consistently. It is an open market where anyone can freely register their scenarios. The market provides about 500 scenarios every year, and signed for filming including The Face Reader (2013), The Treacherous (2015) and Time Renegades (2016).
At this ceremony, winners of 2016 Animation Scenario Contest were announced. The grand prize went to KIM Ji-hyun for Royal Cat, Geum-son, and the best prizes went to KIM Tae-gon for The Pursuit of Paradise and JUNG Kyeong-hwan for White Hero.
Any copying, republication or redistribution of KOFIC's content is prohibited without prior consent of KOFIC.
Related Films Related Company Related News