Special Screening to Celebrate the 5th Anniversary of Indieplus 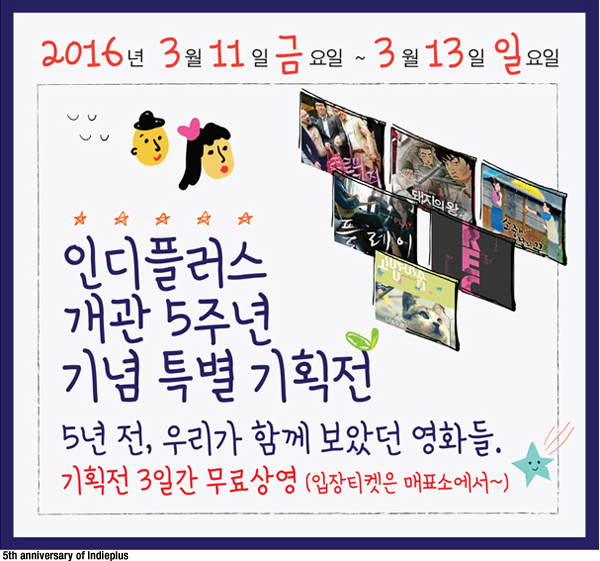 Special screening to celebrate the 5th anniversary of Indieplus, the indie film exclusive theater in Seoul, has been held with the theme of “The Films That We Watched Together 5 Years Ago.” In the screening list are Dancing Cat, Play, The King of Pigs, Green Days, Miracle on Jongno Street, and REC.
Dancing Cat by YUN Ki-hyoung is a documentary depicting the life of stray cats with a very warm perspective; and The King of Pigs by YEON Sang-ho is an animation which was warmly received with vivid visuals and a sharp social message when released in 2011. Green Days is a very well made animation directed by AHN Jae-hoon and HAN Hye-jin, carefully illustrating the pain of growing up.
Play by NAM Da-jung is a music documentary featuring a domestic band called Mate, and Miracle on Jongno Street by LEE Hyuk-sang is a happy documentary about for gay men coming out. Finally, SO Joon-moon’s REC is a melodrama, depicting an evening of a gay couple.
These directors also have participated in this special event. YUN Ki-hyoung, YEON Sang-ho, SO Joon-moon, LEE Hyuk-sang and AHN Jae-hoon held an opportunity to discuss the films with the audience.
Special screening to celebrate the 5th anniversary of Indieplus was held from March 11th through 13th and screened 6 films from 2011 free of charge.
Meanwhile, Indieplus Cinema Center, the second indie film exclusive theater, opened in the underground of Busan Cinema Center on March 11th. It has 36 seats total. Special screeing for celebrating the opening of Indieplus Cinema Center takes place from March 11th through 17th.
Any copying, republication or redistribution of KOFIC's content is prohibited without prior consent of KOFIC.
Related People Related Films