Jan 11, 2016
Winners Are YOON Jeong-min of Book of the Dead, and LEE Da-gyeong of Judgement: He's Alive 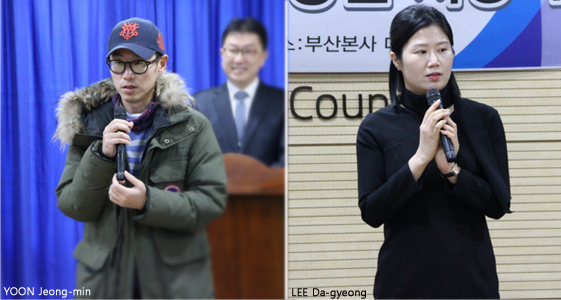 Korean film Council (KOFIC)'s Korean Film Scenario Market held the "2015 Grand Final Award" ceremony on January 5th. The winners are YOON Jeong-min of Book of the Dead, and LEE Da-gyeong of Judgement: He's Alive.
YOON's Book of the Dead is a mystery thriller set in Joseon Dynasty, depicting a serial murder case involving a secret book. The jury explained their choice as: "The author's imagination is well reflected in the scenario, and the completeness of the scenario and plausibility for filming are taken into account."
LEE's Judgement: He's Alive deals with a private revenge on a serial killer, done within the legal boundary. The jury announced that "each character is successfully positioned, and it is a fresh approach to situate private revenge within legal boundary, which may remind the audience of the social responsibility of a film."
Grand Final Award is a scenario competition by KOFIC which started in 2014. Every month Korean Film Scenario Market makes recommendations, and these recommended scenarios are further developed and finally evaluated.

Korean Film Scenario Market is an open market run by KOFIC since 2006, where anyone may freely register their scenarios. So far the scenarios signed for filming through this market are 20 or so, including The Face Reader (2013) and The Treacherous (2015).
Any copying, republication or redistribution of KOFIC's content is prohibited without prior consent of KOFIC.
Related Films Related Company Related News