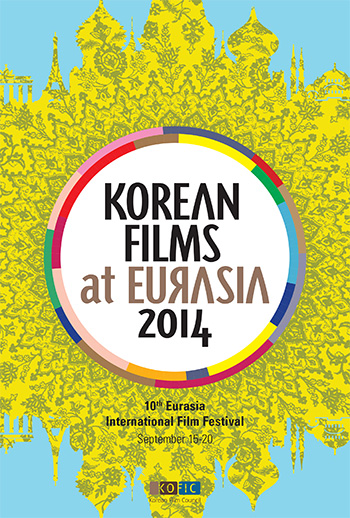 The Korean Film Council (Chairman KIM Eui-suk) will begin to make inroads into Central Asia after South America. From September 15 through 20, the council will hold a Korean cinema showcase and forum at the 10th Kazakhstan International Eurasia Film Festival, a leading film festival in Central Asia. At present, Korean films are exported mainly to North America and some of Asia. The showcase aims to find new partners through the diversification and expansion of Korean films’ export markets and develop new markets by informing the world of the excellence of Korean cinema. The forum will hold the showcase and forum in Kazakhstan after a Korean cinema showcase in Mexico In August.
The event will feature seven Korean films that show recent trends in Korean cinema, an exchange with Kazakh Film which promotes Kazakh films, an MOU on joint film production and An Evening of Korean Cinema with the Korean Cultural Center in Kazakhstan. The Korean Cinema Showcase will present two films directed by IM Kwon-taek and LEE Chang-dong and five films by established and new Korean directors which received good reviews from the Korean and international film worlds. Accordingly, local audiences will be able to watch Come, Come, Come Upward (1989), an IM Kwon-taek film which won the Best Actress Prize at the 1990 Moscow International Film Festival and Poetry (2010), a LEE Chang-dong film which picked up the Screenplay Prize at the Cannes International Film Festival in 2011. In particular, LEE Chang-dong, the director of Poetry will take part in the event as a judge and KANG Soo-yeon, the lead actress of Come, Come, Come Upward will be invited as a special guest.
In addition, the KOREA CINEMA TODAY, a special Korean cinema screening event, will show The Thieves (2012) by CHOI Dong-hoon, The King of Pigs (2011) by YEON Sang-ho, Thuy (2013) by KIM Jae-han and Confession (2014) by LEE Do-yun. CHOI Dong-hoon is a leading commercial filmmaker in Korea and YEON is taking the lead in new Korean animations. Thuy made a sensation as an independent film in 2013 while Confession was invited to the Toronto International Film Festival this year.  In particular, A Hard Day (2014) by KIM Seong-hun will enter the competition section of the Eurasia International Film Festival for the Grand Prize.  A Hard Day enjoyed rave reviews in the Directors' Fortnight of this year’s Cannes International Film Festival. Thus, all eyes are on whether or not the film will be able to take home the prize.
This event is characterized by the fact that it focuses on promoting exchanges beyond simply screening Korean films.  On September 16, the Korean Film Council will discuss more concrete cooperation by signing an MOU with Kazakh Film for exchanges of Korean and Kazakh films and filmmakers and actors and cooperation for joint production. After signing the MOU, they will hold a roundtable event to introduce the visions of the Korean film industry. In the evening of the day, the council and the Korean Cultural Center in Kazakhstan will hold An Evening of Korean Cinema under the theme of Korean food and culture.
Kazakhstan has the ninth largest oil reserve in the world and is rich in minerals such as tungsten. Recently its economy is rapidly growing. In addition, about 100,000 Korean-Kazakhs live in Kazakhstan. Korean contents such as Korean TV dramas are enjoying strong popularity there. Therefore, Kazakhstan is expected to emerge as an economic and cultural partner of Korea in the future. The Korean Film Council’s events to promote Korean cinema in the Kazakhstan International Eurasia Film Festival are expected to contribute to helping the Korean culture including Korean cinema to make a foray into Central Asia.
Any copying, republication or redistribution of KOFIC's content is prohibited without prior consent of KOFIC.
Related People Related Films Related Company