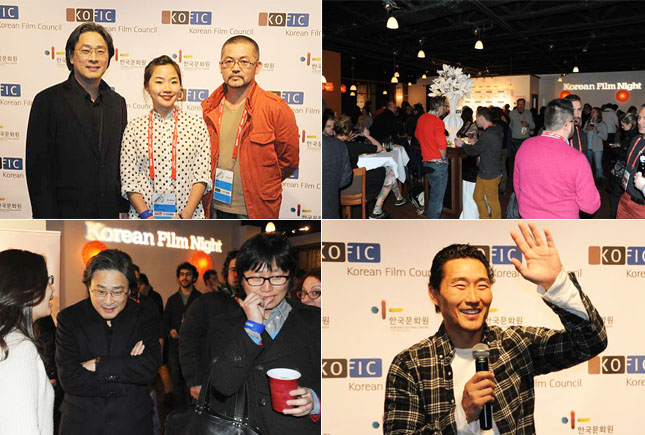 The Korean Film Council held a “Korean Film Night” to congratulate Korean filmmakers who were invited to the 29th Sundance Film Festival being held in Park City, Utah of the U.S. and to promote the exchange of opinions and friendship between Korean filmmakers and foreign filmmakers at 6 pm on January 21st (local time).
Jiseul, an O-Muel film about the April 3 Incident on Jeju Island of Korea, advanced into the feature film competition of the world cinema category of this year’s Sundance Film Festival. Bite of the Tail directed by KIM Song-E was invited to the short animation film category while the world short film category invited You Are More Than Beautiful, a KIM Tae-yong film starring KONG Hyo-jin and PARK Hee-soon. Stoker, PARK Chan-wook's Hollywood debut was screened with great fanfare during its world’s premiere on January 20th.
Directors PARK Chan-wook, O-Muel and KIM Song-E took to the by taking part in the event held at a restaurant at the center of the festival. In addition, the event welcomed approximately 300 American filmmakers and actors such as Daniel Dae KIM, a Korean-American Hollywood actor famous for Lost, Paul FEDERBUSH, in charge of the world cinema category of the Sundance Film Festival, Eugene HERNANDEZ, a co-founder of Indiewire and agents from WME and ICM, leading agencies in Hollywood. They exchanged opinions and promoted friendship with their Korean counterparts at the event.
Any copying, republication or redistribution of KOFIC's content is prohibited without prior consent of KOFIC.
Related People Related Films Related Company