NHO Young-ran, the animation director of the Netflix short that took over social media

Dec 08, 2020
“I knew independent animation could be made popular too!” 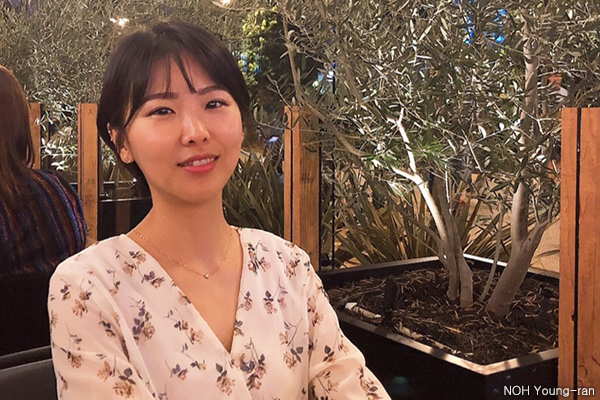 The reaction to the 12-minute short animation If Anything Happens, I Love You released on Netflix has been very positive. The TikTok hashtag #IfAnythingHappensILoveYou exceeds 40 million views, propelled by a popular challenge that consists in users filming their before and after-viewing reactions. Foreign media such as IndieWire and Decider consider this film a strong candidate for the best animated short Oscar. The story around two parents living in a house where only memories remain after losing a child. It was written and directed by Will MCCORMACK, the screenwriter of Toy Story 4, and Michael GOBIER, actor and director. Paradoxically, the animation’s use of muted colors and the prominence of the hand-drawn look heighten the emotions of the characters. This style comes from animator NHO Young-ran, a graduate of the California Institute of the Arts (CalArts). She studied in the US after working as an animator in Korea and supervised the animation for If Anything Happens, I Love You. She is currently working as a story artist on the feature animation Groove Tails directed by Bob LOGAN and is also preparing a live-action short film based on a script of her own.
The reaction to the film has been incredible.
At first it was hard to believe. It was a great honor to have it debut on Netflix. It was released on the streaming platform on November 20, and a few days later I received text messages from people I worked with asking me, “Did you see the TikTok challenge?” It was kind of overwhelming. I looked at the TikTok challenge thinking this was incredible.
The artistic value of the film was already well established as it was selected for several festivals, and this TikTok trend only added to its popularity.
In Korea, independent animation is not something the public has heard much about. That’s why I was wondering how many people would watch this title once Netflix releases it, but for it to become a hit on the streaming platform and to spawn a popular TikTok challenge is just amazing. It struck me that [independent animation] too can reach a wide audience, and I was even a little envious. I wish indie films could become more popular in Korea as well. 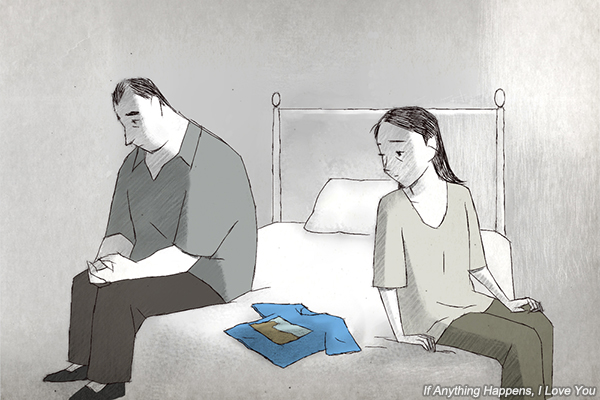 How did you start working on this project?
After graduating from CalArts, I was working as a freelancer on a music video made in animation. Although that didn’t bring a stable income, I was still enjoying my work. Then the two authors of If Anything Happens, I Love You got in touch with professors at my school and asked them if they had any animators to recommend, and apparently, I was one of them. The two looked through my portfolio of school assignments and liked what they saw. After that, they sent me the script for If Anything Happens, I Love You. It was a short script of less than 10 pages, and I had a good feeling about it. I tend to lean towards works that have a message and emotions rather than those that are all heart-warming and fun, so I thought this project was right up my alley. When I started visualizing the script, one of my favorite films came to mind. It is a work called Father and Daughter by Michaël DUDOK DE WIT, which won the Academy Award for Best Animated Short in 2001. It is a simple film with subtle emotions. I thought it would be nice if we could make something in such a style. I scheduled a meeting with the two directors, we met at a café, and while talking about the movie, they told me they had the exact same idea. At that moment it felt like sparks were flying through my head. I said, let’s give it a try. And this time, I enjoyed working on it even more since it was a project I was involved in at every step of production, from start to finish, including character design, background design, and visual development.
This also reminds me of the film you made at CalArts in 2018 (https://vimeo.com/user39655444), which also told the story of a child and a mother.
The two directors actually contacted me after watching that film. It was the last movie I made when I was a senior at CalArts. I wanted to polish it up, but I couldn’t meet the deadline. It was a slight bummer, but now that film has become more significant to me since it was upon watching it that they decided to contact me.
The black and white look is central to If Anything Happens, I Love You, and it was made in hand-drawn animation. There is no dialogue. Could you tell us more about the circumstances surrounding your decision to go with such a minimalist approach?
I think it would have been rather disturbing if, on the contrary, the backgrounds or colors used were bright. The backgrounds were designed to be as simple as possible so that the viewer can focus on the emotion of the characters and the simple motions themselves. For the flashback scene, later in the film, I wanted to create a contrast with what came before by using more vivid colors. 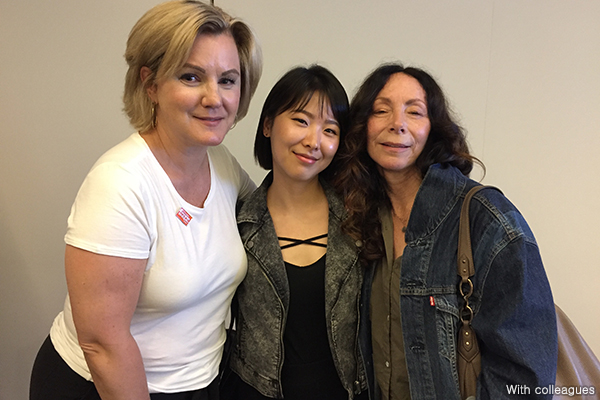 It also has the feel of paper texture. Is there a reason you opted for that effect?
That pretty much reflects my own taste. If it weren't for the pencil drawing and paper texture, the frame would look too empty. I tried to make it simple visually but not simple in execution. So, I added a texture that feels like paper grain and gave a pencil quality to the brushes.
The film tackles feelings that are not easy to deal with. Did you have any difficulty understanding and expressing them?
Before funding was secured, I had a lot of meetings with the directors and had a lot of time to empathize with the characters. It was really helpful to try to understand the characters while doing the design work. More particularly, I watched Birthday several times. While watching this movie, I was wondering what it would be like if I could translate JEON Do-yeon into an animation character.
I think that Birthday probably came to mind to Korean audiences who watched the movie. This title is a work that really makes you appreciate the power of the animation medium as a means of expression. This is especially true of the part that shows the shadows and the spirits in motion.
I think it was a fairly clever idea to have shadows fighting and changing postures. After all, this is an animation. When making an animation film, I think it is important to ask yourself why it should be made in animation. As you said, the visual representation of these shadows could only be done with animation. 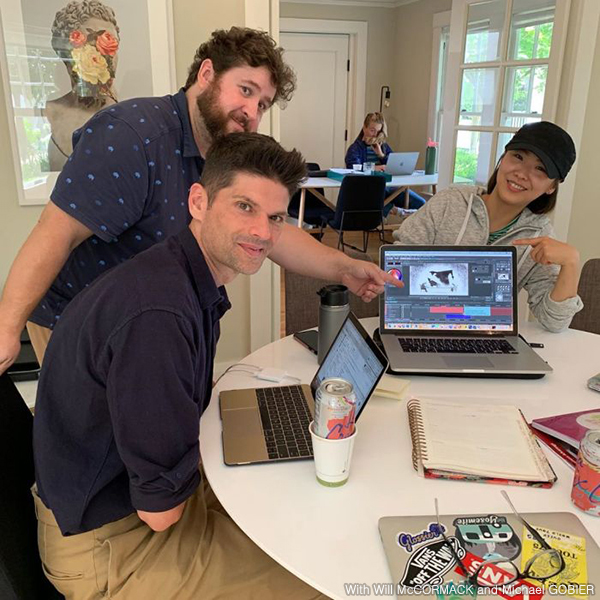 Directors Will MCCORMACK and Michael GOBIER are both experienced actors too. I read an interview with the directors in which they explained they made use of their acting skills for a reference video.
Yes. Since I couldn’t mimic the male character no matter how much I tried, I had some help from Mike, who has a slightly similar body frame. He is a really good actor, so it was immensely helpful.
With this film, you have collaborated with veteran Hollywood filmmakers like WILL MCCORMACK (screenwriter and actor for Toy Story 4), Laura DERN of Marriage Story who served as executive producer, and producer Gary GILBERT (La La Land).
Gary GILBERT joined the project while we were adding the final touches to the film. He is very professional, so he gave us a lot of objective feedbacks and mentioned a lot of things we didn't think about. Laura DERN, who was the executive producer, saw the film when it was almost completed, and she liked it so much she jumped on board. I could only see her from afar. (laughs)
This work must have been a great source of inspiration for you as a creator.
As an artist, what I want most is for many people to see my work and to give their reactions. I wonder when I will ever receive this level of attention again once I start directing my own films. I still have a lot of doubts about myself, so it is impossible for me to just enjoy this moment, but still, I'm trying to enjoy it to the best of my ability. This is the first time I receive the attention of so many people. It is a great honor as an artist. 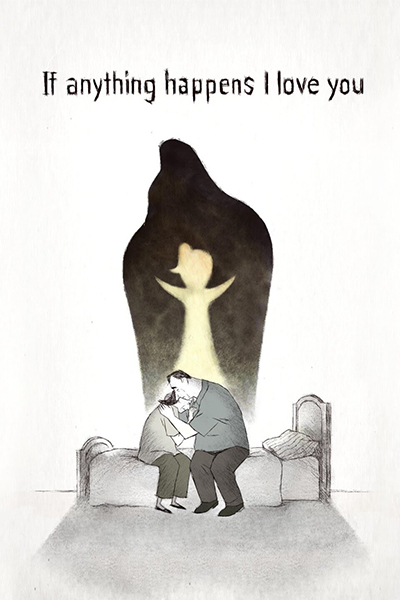 What are you currently working on?
I am working on a different project with the producer of If Anything Happens, I Love You, an animation feature called Groove Tails. For this project, my contribution will be as a storyboard artist.
You said you were interested in creating stories. Is it what you are heading for right now?
Yes. When I was at CarlArts, the work I was doing was closer to that of animator than storyboard artist and I did a lot of preparatory work. In order to work as a storyboard artist, you need to prepare a new portfolio from scratch. Fortunately, with my directing work on If Anything Happens, I Love You, I also participated in the storyboard and this is what led me to work as a storyboard animator. I think I was lucky because I was able to try everything with one film. I am so grateful.
What kind of story do you want to tell in the future?
I like to address the notion of death. I am interested in what led some people to their death, and in the history of people who knew that their death was near. If Anything Happens, I Love You is a movie that is closely related to death. I have a lot of interest in life before the end, and in the universes only these people can have, so I’m writing a script revolving around a similar idea. I am extremely interested in people's psychology and thoughts.
Any copying, republication or redistribution of KOFIC's content is prohibited without prior consent of KOFIC.
Related People Related Films