Jan 29, 2019
LOVE YOURSELF IN SEOUL Opens in 3rd as Local Titles Dominate 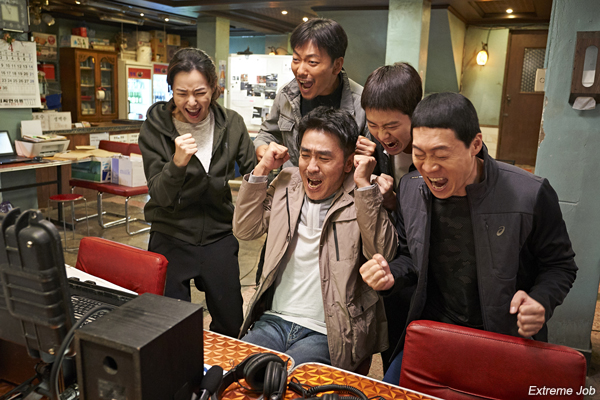 If the recent 2018 end-of-year season proved a disappointment, the Korean box office is showing no signs of trouble in January as two local hits have been joined by an even bigger domestic smash success which just set a record for the month. 3.15 million tickets were sold a week and a half ahead of the Lunar New Year holiday, an overwhelming majority of which (93%) were secured by local films.
Positioning itself just ahead of one of Korea’s two main holidays, local crime comedy Extreme Job with RYU Seung-ryong, LEE Ha-nee and JIN Seon-kyu had a commanding opening last Wednesday and exceptional word-of-mouth turned the film into a sensation come the weekend, as it wounded up with 2.41 million sales (USD 19.3 million) over the three-day and 3.14 million entries (USD 24.61 million) over just five days. This represented a record start for January and though it faces some competition this week it seems likely that this local smash has a long life ahead of it.
After two weeks on top, the Colonial Era drama MAL·MO·E: The Secret Mission dropped one spot and 70%, adding another 188,000 viewers (USD 1.44 million) to push its total to a strong 2.66 million admissions (USD 19.99 million).
Debuting in third place was the BTS concert documentary Love Yourself in Seoul, which scored 181,000 sales (USD 1.54 million) from its Saturday and Sunday screenings. The film also debuted day-and-date in several other countries.
The local fantasy comedy The Dude in Me was also down two spots in its third weekend as competition slashed just over 80% of its audience. Nevertheless, the film brought in another 88,000 spectators (USD 688,000), giving it a healthy 1.87 million viewers (USD 14.36 million) to date.
The only foreign film in the top five was Ralph Breaks the Internet, which filled another 70,000 seats (USD 497,000) during its fourth weekend, giving it a 1.74 million viewers (USD 12.29 million) total.
Local action-thriller Hit-and-Run Squad is poised to join the fray this coming week for what promises to be a massive Lunar New Year showdown.
Any copying, republication or redistribution of KOFIC's content is prohibited without prior consent of KOFIC.
Related People Related Films Related News