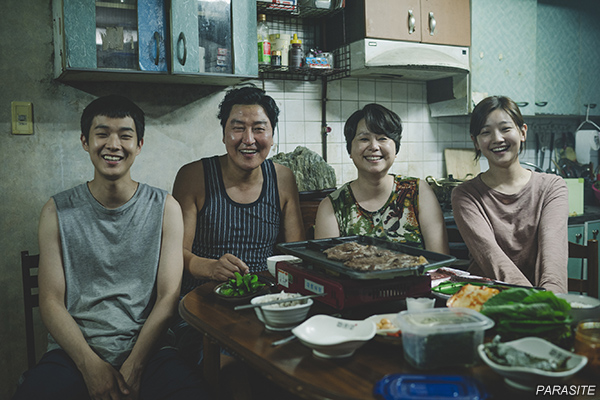 Hot on the heels of its historic three nominations at the Golden Globes, BONG Joon-ho’s PARASITE has landed a prestigious nomination for Best Ensemble at the forthcoming 26th Annual Screen Actors Guild (SAG) awards, as well as a nod in the Best Film Editing - Drama category of the 70th ACE (American Cinema Editors) Eddie Awards.
While the actors of PARASITE weren’t featured in any individual acting categories, BONG’s film received a nomination for Best Ensemble, a section which is seen as the body’s best film award equivalent. SONG Kang-ho, LEE Sun-kyun, JO Yeo-jeong, CHOI Woo-shik, PARK So-dam, JANG Hye-jin, LEE Jung-eun, PARK Myeong-hoon, JEONG Ji-so and JEONG Hyeon-jun make up the ensemble that has been recognized by SAG. It is only the second time for a foreign language film to be nominated for Best Ensemble, following Roberto BENIGNI’s Life Is Beautiful in 1997.
The cast of PARASITE will be facing off against the actors of Bombshell, The Irishman, Jojo Rabbit and Once Upon a Time in Hollywood. Considering the overlap between the SAG and Academy Award voters, this Best Ensemble nomination further strengthens PARASITE’s chances of landing a Best Film nomination at the Academy Awards next month.
Equally impressive is YANG Jin-mo’s nomination for Best Film Editing in the drama category from ACE’s Eddie Awards. YANG is nominated alongside Jeff GROTH for Joker, Jennifer LAME for Marriage Story, Michael McCUSKER and Andrew BUCKLAND for Ford V Ferrari as well as Thelma SCHOONMAKER for The Irishman.
YANG is one of Korea’s top editors, whose credits include BONG’s Okja (2017), JANG Joon-hwan’s 1987: When the Day Comes (2017), KIM Jee-woon’s The Age of Shadows (2016) and YEON Sang-ho’s TRAIN TO BUSAN (2016).
Any copying, republication or redistribution of KOFIC's content is prohibited without prior consent of KOFIC.
Related People Related Films Related News