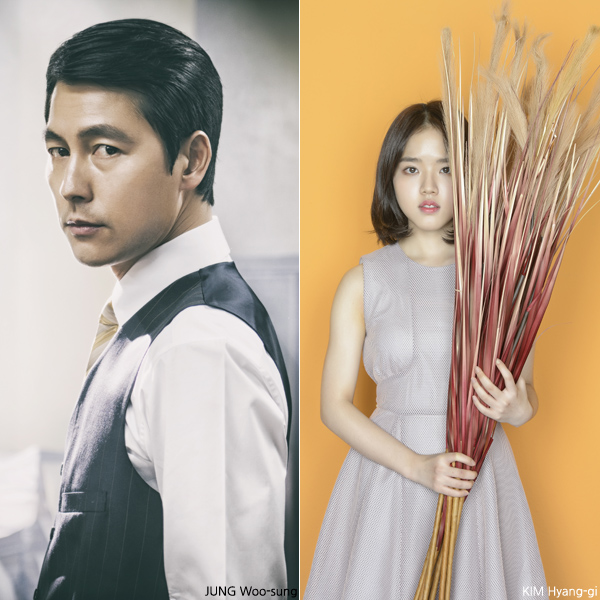 Leading man JUNG Woo-sung and new star KIM Hyang-gi are set to team up for the upcoming court thriller Witness (translated title), the latest film from Punch (2011) director LEE Han.
In the film, JUNG will feature as Soon-ho, an unsuccessful attorney who is representing a client in a murder trial. KIM plays Ji-woo, an autistic girl who was the only witness to the crime.
JUNG was last seen on screen in YANG Woo-suk’s North Korea-set action drama Steel Rain (2017), which was recently granted global distribution by Netflix after a Korean theatrical release in December. He will next be seen in the sci-fi action Inrang (Korean title), KIM Jee- Jinroh: The Wolf Brigade remake, which is due out in July.
KIM Hyang-gi made a name for herself in the comfort woman period drama Snowy Road (2017) before becoming a star overnight upon featuring alongside HA Jung-woo, CHA Tae- and JU Ji-hoon in KIM Yong- fantasy epic Along with the Gods: The Two Worlds (2017), which became the second most successful Korean film of all time following its release late last year. KIM will next feature in the hit’s sequel, titled Along with the Gods: The Last 49 Days, which is expected to hit theaters in early August.
Director LEE has worked with KIM before, as the latter featured in his 2014 drama Thread of Lies. Beyond his inspirational drama Punch, his most successful work with over five million viewers, the director was most recently behind the camera for the period war drama A Melody to Remember (2016).
Witness (not to be confused with the LEE Sung-min thriller The Witness, due out later this year) will begin production in June and is eyeing a 2019 theatrical release.
Any copying, republication or redistribution of KOFIC's content is prohibited without prior consent of KOFIC.
Related People Related Films