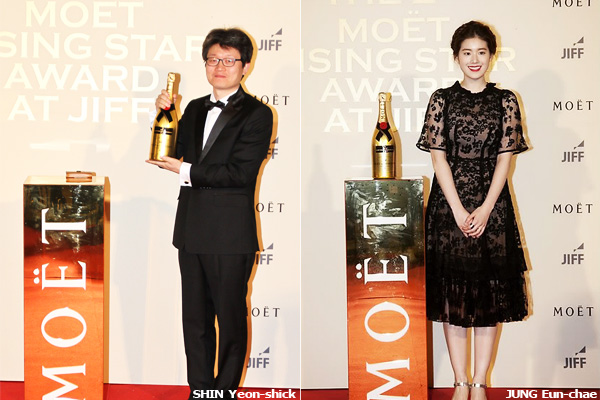 Actress JUNG Eun-chae and director SHIN Yeon-shick have received the "Moet Rising Star" Awards. The two received the awards at the event which saw its second edition in Jeonju's Traditional Village. The event is organized by well-known champagne brand Moet and Chandon and it aims to support rising acting and directorial talents. Last year the event was held at the Jecheon International Film Music Festival.
This year JUNG was one of the winners after starring in director HONG Sangsoo's Nobody's Daughter Haewon. JUNG said, "It is an honor to win an award at such a good event." Director SHIN Yeon-shick of The Fair Love and The Russian Novel also received the award. He has recently gained international recognition for his The Russian Novel and he is currently working on Rough Play which is produced by director KIM Ki-duk.
The two recipients of the award will attend the Asian Film Awards in Hong Kong with all expenses paid for by Moet and Chandon. At the awards ceremony were actor JUNG Woo-sung, a jury member at the 14th Jeonju International Film Festival. and AHN Sung-ki as well as director RYOO Seung-wan and a number of important industry professionals.
Any copying, republication or redistribution of KOFIC's content is prohibited without prior consent of KOFIC.
Related People Related Films Related Company