NAFF announces a record 20 selections for It Project 2012 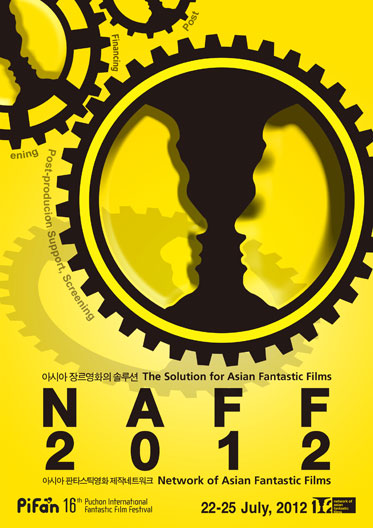 The 5th annual Network of Asian Fantastic Films (NAFF), to be held from July 22 to 25 in conjunction with the Puchon International Fantastic Film Festival (PiFan), announced earlier this week a record number of 20 It Project 2012 selections from 13 countries, including the USA, UK, Germany, India, Canada, Australia, Singapore, Japan, Malaysia, the Philippines, Taiwan, Hong Kong and South Korea.
Started in 2008, NAFF’s It Project began by providing a project market specifically for genre films by young filmmaking talent from Asian territories. Since then it has broadened its horizons, now accepting submissions from all across the globe, as is evident in this year’s cohort.
Featured strongly in 2012 is the increasing importance of multi-national co-productions in Asia and beyond. Kenji TERADA, best known as the screenwriter for the <Final Fantasy> video game series, will bring his film project <AR: After-Recording>, a Japan-Korea-USA-France co-production. KIM Tai-sik is presenting <Kuala Lumpur Taxi>, a Korea-Malaysia co-production, and the ambitious India-UK-Korea co-production <The Profane>, from Sidharth SRINIVASAN, was also selected. Additionally, four other Korean co-productions will appear.
Displaying the program’s now established reputation, a number of decorated filmmakers will participate in this year’s It Project. JANG Chulsoo, whose previous film <Bedevilled> screened at Cannes, is bringing his <Service for People>, and Academy Award nominee Matthew PATRICK’s Berserk will also join. Additionally, Taiwan’s Arvin CHEN, director of <Au Revoir Taipei>, is presenting <Afternoon Delight!> as the winner of the NAFF Award at the 2012 Hong Kong Asia Film Financing Forum (HAF).
This year the It Project will also host its first 3D animation project, SON Daekyun’s <The Birth of B/W Man>, as well as <The Weirdo from Mars>, which is produced by Andy YOON, who also produced the closing film of PiFan 2011, <Blind>.
Coming together with financiers, distributors and buyers from all over the world, NAFF helps filmmakers arrange a number of 30-minute one-on-one meetings. Over 200 such meetings will take place over two and half days during It Project. Additionally, four cash awards totaling USD $34,000 and three post-production support awards will be presented during the NAFF Award Ceremony & Closing Party on July 25.
For more information, please contact It Project Staff Vicky Lunyu LIN, by e-mail (naff.itproject@pifan.com) or phone (+82 32 327 6313/ ext.121). It Project 2012’s full roster follows.
* It Project 2012 Official Selections (in alphabetical order)
Any copying, republication or redistribution of KOFIC's content is prohibited without prior consent of KOFIC.
Related People Related Films