Oct 07, 2014
The two nations signed an MOU on joint audio-visual production on October 14. 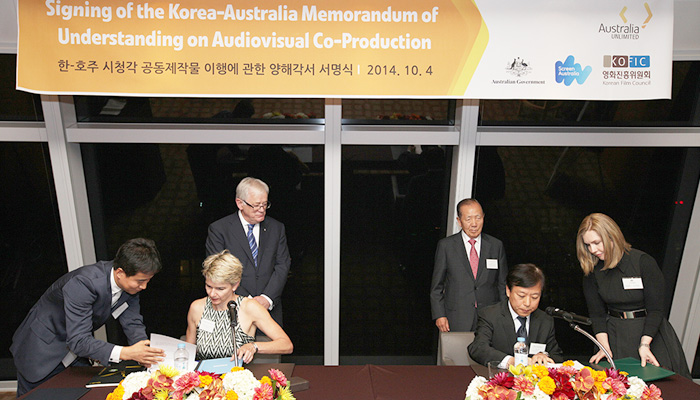 The Korean Film Council (Chairperson KIM Eui-suk) paved the way for Korea-Australia film production. At 6:00 pm on October 4, the Korean Film Council held a ceremony to sign an MOU on the joint audio-visual production with Screen Australia at Park Hyatt Busan Hotel in Busan.
The MOU aims to support Korean and Australian filmmakers and audio-visual productions and their audio-visual products’ entry into the two nations by having films and broadcasting programs jointly produced by the two nations recognized as their own local productions. The agreement regulates approval procedures, conditions and benefits for such audio-visual products.  Korea and Australia officially signed the Korea-Australia Free Trade Agreement on April 8, 2014. The two nations inked a joint audio-visual production agreement in the form of an annexed document for cross-border service trade. The signing of the MOU is quite meaningful in that Korea and Australia signed the MOU as a following step after the Korea-Australia Free Trade Agreement.
Attending the ceremony were Fiona CAMERON, COO of Screen Australia, KIM Dong-ho, chairman of Presidential Committee for Cultural Enrichment, LEE Choon-yun, the Korean Association of Film Art & Industry, chairman of the Korean Association of Film Art & Industry and president of Cine 2000, WON Dong-yeon, vice chairman of the Korean Film Producers Association and president of REALies Pictures, Andrew ROBB, Australian Investment and Trade Minister and Bill Paterson, Australian Ambassador to Korea, Brett COOPER, a senior trade commissioner of the Australian Trade Commission (Austrade) among other VIPs. Korea and Australia handed in the agreement to the National Assembly and the New Parliament House, respectively to have it ratified. If the agreement is ratified, the agreement will take effect.
The ceremony served as an event for the Korean Film Council and Screen Australia to promise to smoothly implement the agreement and cooperate. The signing of the agreement is expected to promote Korean filmmakers’ joint international production since Australia is concentrating on supporting its films and promoting joint production with other English-speaking countries such as running a tax reimbursement system for Australian films. The signing of the FTA and the MOU between Korea and Australia increased the number of nations that signed joint film production agreements with Korea to four – France, New Zealand, China and Australia. The Korean Film Council has been producing tangible outcomes by taking active part in discussions about intergovernmental joint production agreements to systematically support Korean filmmakers’ joint production with leading countries in the world film industry.
Any copying, republication or redistribution of KOFIC's content is prohibited without prior consent of KOFIC.
Related People Related Company