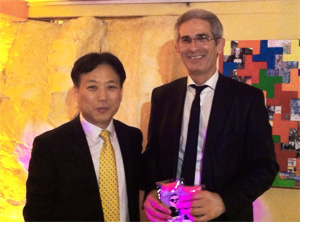 The Korean Film Night, organized by the Korean Film Council, was held at 9pm on May 20th at the 66th Cannes International Film Festival. Some 500 industry professionals attended the event, making it a great success. The Vice Festival Director of Cannes, Christian Jeune, Charles Tesson, the director of Cannes' Directors' Fortnight as well as the director of the Cannes Film Market, Jerome Paillard, attended the event as well as Alberto Barbera of the Venice International Film Festival and Christoph Brecht of the Berlin International Film Festival, meaning that representatives of all three of the major film festivals were there.
Officials from companies, including France's Wild Side, which recently confirmed they will import director BONG Joon-ho's Snowpiercer, were there as well as director of film of Arte TV Olivier Pere and the Chinese director Jia Zhang Ke.

There are no feature-length Korean films at Cannes this year but three short films by young Korean directors are getting good responses. MOON Byoung-gon, of Safe, which was invited to the official short film competition section, KIM Soo-jin whose work The Line will be shown in the student film section and Breathe Me by HAN Eun-young, a film invited to the critics' week, were introduced during the event, drawng a great level of interest. Also, K-pop music and cup noodles were available to introduce aspects of Korean culture. The 66th Cannes International Film Festival will close on May 26th with its awards ceremony.