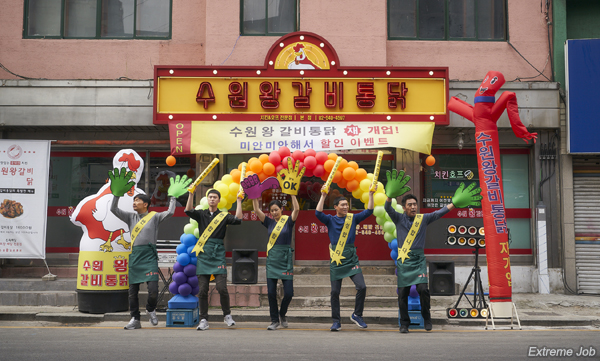 The smash success of Extreme Job continued for a third week, which kept overall business roaring after the Lunar New Year holidays. Korean films claimed a strong 71% market share as over 3.07 million tickets were sold.
Local comedy smash Extreme Job commandingly clinched the top spot for a third consecutive week, as it slowed just 26% to add another 1.85 million viewers (USD 14.35 million) to a gargantuan total that now stands at 12.84 million admissions (USD 98.97 million). The film is now seventh on the all-time local ranking (eighth if foreign releases are included) and at its current place should reach second place on the all-time chart within the next week or two.
Alita: Battle Angel had a decent start far behind in second with 578,000 entries (USD 4.92 million) while it has accumulated 1.26 million sales (USD 10.84 million) since its Tuesday debut. Reviews and audience reactions have been positive, which may help the film stay on the charts a little longer.
Decelerating a hefty 62% in its second lap was the local petrolhead action-drama Hit-and-Run Squad, which pocketed another 216,000 tickets (USD 1.68 million) to bring its total to a middling 1.73 million (USD 12.86 million), which is only about halfway to its break-even point.
How to Train Your Dragon 3 slowed 52% in its sophomore frame, bringing in another 201,000 spectators (USD 1.48 million), for 1.81 million viewers (USD 8.78 million) to date.
Rounding out the top five was Hello Carbot: The Secret of Omphalos Island, also in its second week, as it dropped 71%, recording another 74,000 entries (USD 516,000) for a total of 523,000 tickets sold (USD 3.65 million).
Next week sees the well-received local drama Innocent Witness with JUNG Woo-sung and KIM Hyang-gi and the local comedy THE ODD FAMILY : ZOMBIE ON SALE enter the fray along with Mary Poppins Returns, though they will have their work cut out for them if they want to swipe the box office crown away from Extreme Job.
Any copying, republication or redistribution of KOFIC's content is prohibited without prior consent of KOFIC.
Related People Related Films Related News