ALONG WITH THE GODS Continues March Towards Record Books 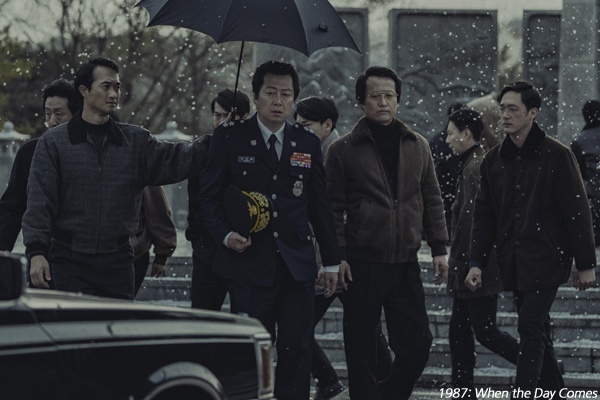 Closing out the year with a bang was the busiest New Year’s Eve weekend on record, during which three local releases controlled the charts. Just over 90% of tickets went to domestic product as a stellar 4.59 million viewers marched into theaters just ahead of the new year.
Down only 10% after one of the biggest opening weekends of all time, Lotte Entertainment’s VFX fantasy epic Along with the Gods: The Two Worlds added a huge 2.46 million admissions (USD 19.24 million) to reach a massive 8.54 million entries (USD 64.09 million) even before accounting for New Year’s Day. The 10 million club will welcome a new member within days while the real question is how far will this blockbuster soar?
Star-studded political drama 1987: When the Day Comes was the last of the local end-of-year titles to bow and it did so with some of the best scores recorded by critics and viewers over the last year. The CJ Entertainment film bowed with a big 1.35 million viewers (USD 10.6 million) over the weekend and 1.94 million spectators (USD 14.29 million) since its Wednesday start while strong word of mouth should ensure a lengthy run through January.
With so much local competition, NEW’s NK action-drama Steel Rain was down 63% as it sold another 290,000 tickets (USD 2.24 million), which was enough to push its total past the 4 million admissions (USD 30 million) barrier, a respectable milestone for a film of its size.
The Greatest Showman lost half its Christmas audience as it slowed to 147,000 entries (USD 1.16 million) for a total of 815,000 admissions (USD 6.25 million) while the Pokemon the movie: I Choose You! closed out the top five with 87,000 viewers (USD 625,000) for 415,000 spectators (USD 2.93 million) in ten days.
The only major release posing a threat this weekend will be the family title Jumanji: Welcome to the Jungle but overall business should continue to be dominated by local juggernauts in the first weekend of 2018.
Any copying, republication or redistribution of KOFIC's content is prohibited without prior consent of KOFIC.
Related Films Related Company Related News