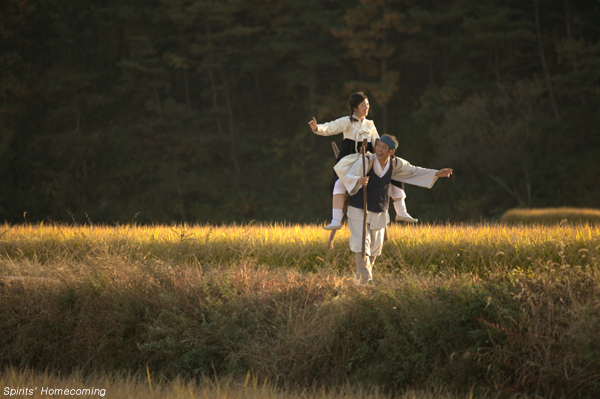 Local comfort women drama Spirits' Homecoming remains a force to be reckoned with on the charts, keeping most of its audience as it benefits from strong word-of-mouth. A new US release and strong holdovers gave America the market edge at 55% as 1.97 million tickets were shifted over the frame.
Dipping just 25%, Spirits' Homecoming added 600,905 viewers (USD 4.03 million) for a 2.6 million admissions total (USD 16.59 million), a stellar result for an independent crowd-funded title. On Monday morning, CHO Jung-rae’s film was still top of the reservations chart, with a 23% share of advance ticket sales.
Having a stronger-than-expected debut in second place was Hollywood sword-and-sandals pic Gods of Egypt. The film, which has been the subject of much racial discourse in the west, mustered a 442,387 spectators (USD 3.15 million) bow, with 502,119 admissions (USD 3.55 million) in the four days since its debut.
Sliding a light 31% was Disney toon Zootopia, adding 296,354 viewers (USD 2.03 million) to its war chest, which now stands at an impressive 1.9 million admissions (USD 12.01 million). The film scored a record opening for a Disney original animation stateside, bowing to USD 73.7 million over the weekend.
In fourth place, Deadpool began to wind down its run, dipping 63% for another 171,631 tickets (USD 1.25 million) and a new total of 3.13 million viewers (USD 21.69 million). Just behind it, LEE Joon-ik’s Colonial Era drama DONGJU; The Portrait of A Poet decelerated 42% for another 112,770 spectators (USD 760,724), as it inches towards the one million admissions mark.
Michael Bay’s war drama 13 Hours: The Secret Soldiers of Benghazi opened in sixth with 83,780 viewers (USD 573,555) while Best Picture winner at the Oscars Spotlight stayed flat in eighth post-awards with 56,455 viewers (USD 411,114) and has taken in 226,737 admissions (USD 1.51 million) to date.
Next week will see local drama HIYA and thriller Missing You, as well as Hollywood action film London Has Fallen enter the marketplace.
Any copying, republication or redistribution of KOFIC's content is prohibited without prior consent of KOFIC.
Related People Related Films Related News