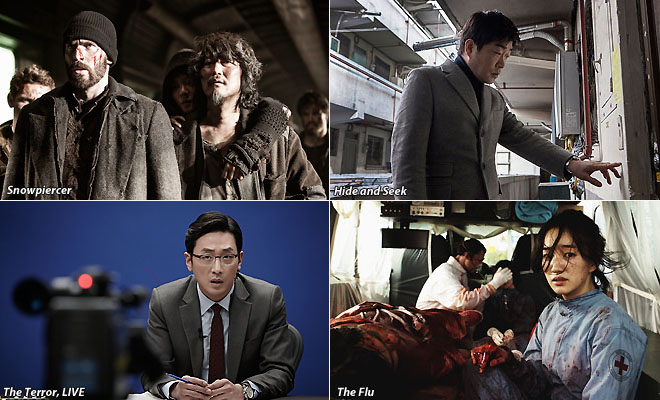 Korean films are experiencing a record month as four local thrillers went head to head for the top spot over the past two weeks. August is always a fertile time for Korean cinema as the Hollywood summer enters its slow period while locals rush to the multiplexes to beat out the summer heat. While many genres have done well in the period over the years, the Korean thriller has met with the most consistent success. Recent years have yielded popular offerings such as The Thieves, The Traffickers, Neighbors (all 2012), Blind (2011), I Saw the Devil, and The Man from Nowhere (both 2010).
The popularity of Korean thrillers was certainly evident over the last fortnight as four new titles (Snowpiercer, Hide and Seek, The Flu and The Terror, LIVE) occupied the top four spots on the chart during the period and accounted for 83.7% of the total market.
Snowpiercer was still front of the pack but while the blockbuster has eclipsed eight million viewers in the country, it has been overtaken by a pair of new offerings on the daily chart. BONG Joon-ho’s sci-fi epic edged past the eight million admissions milestone in 19 days after adding another 3,899,625 admissions over the past two weeks. While an impressive feat, its pace is behind that of The Host (2006) and The Thieves, both of which reached the mark in just 16 days. The film has now clocked in KRW 60.3 billion (USD 53.6 million). With 8,415,338 admissions banked to date, Snowpiercer has been a big success for distributor CJ Entertainment. The question on everyone’s mind now is whether it will cross the ten million admissions mark. As it stands, the film is still performing well but heavy competition has significantly eroded its presence.
The current film on top of the daily charts is the dark thriller Hide and Seek, which surprised analysts by taking the number one spot ahead of The Flu, which opened on the same day. The debut feature by HUH Jung has tallied 2,820,963 tickets sales in the eight days since its release, which included the Independence Day holiday on Thursday, August 15th, and seems poised to perform well throughout the rest of the month.
At number three was the surprise hit The Terror, LIVE from director KIM Byung-woo. The HA Jung-woo vehicle added 2,646,042 over the period and has now amassed a total of 5,193,739 admissions. The high concept thriller held its own against Snowpiercer (both were released on July 31st), but with further competition this past week the film has begun to show signs of slowing down.

At number four was KIM Sung-soo’s epidemic thriller The Flu, the Beat (1997) filmmaker’s first film in ten years. After a strong start out of the gate (it was number one on the chart on its opening day), the JANG Hyuk and Soo-ae starring picture slowed behind its competitor Hide and Seek. The film has recorded 2,189,557 during its eight days in theaters. While The Flu is unlikely to match the totals of the market’s other current local hits, it is still performing well and should add significantly to its total in the coming weeks.
At a distant number five was the Hollywood film Epic, one of the many animations released around this time hoping to capitalize on the school holidays. The film brought in 789,006 viewers. Three more children’s films ranked in the subsequent spots, Turbo (358,032), Detective Conan: Strategy Above the Depth (353,519) and The Smurfs 2 (321,522).
The local four sitting atop the chart seem to be well positioned to maintain their dominance as no significant competition will come their way until the release of Hollywood’s Elysium on August 29th.
By Pierce Conran 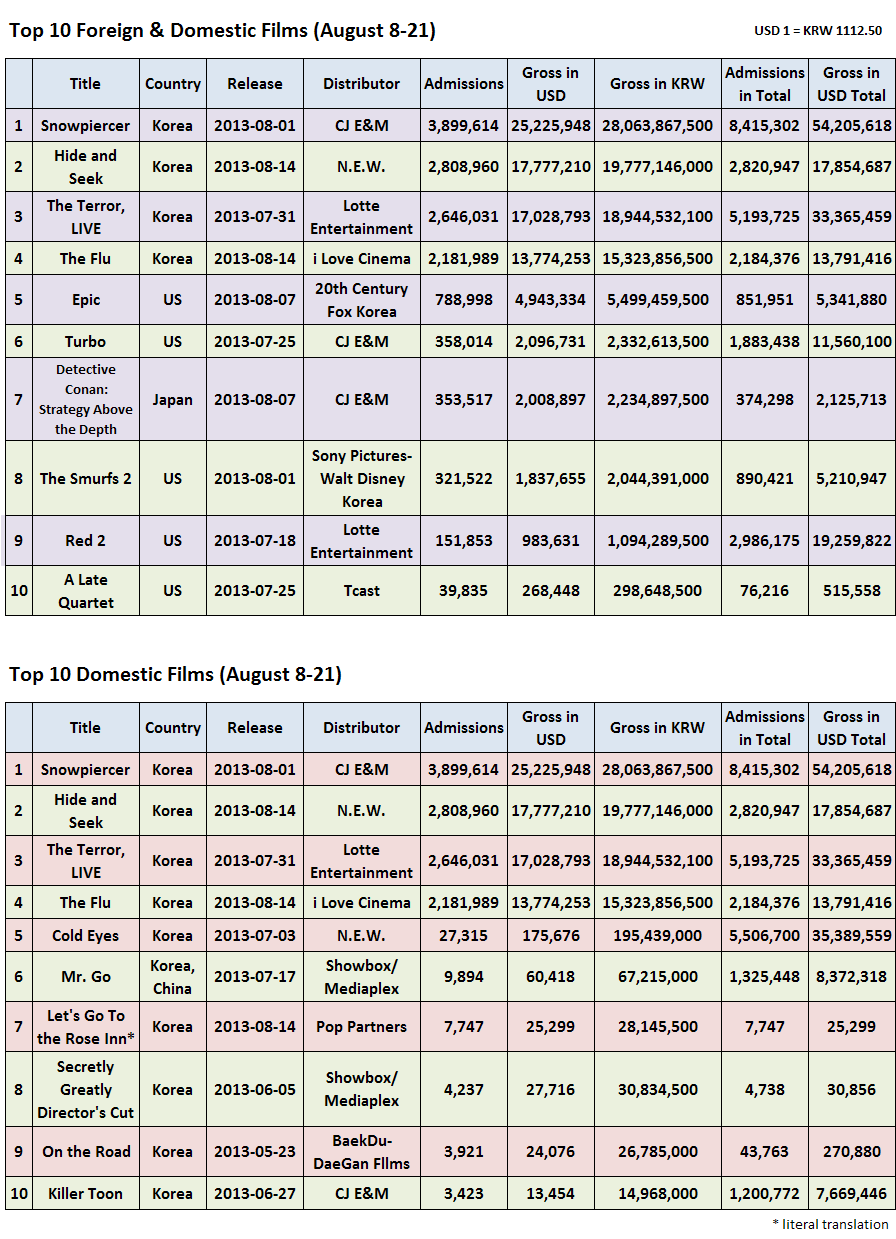