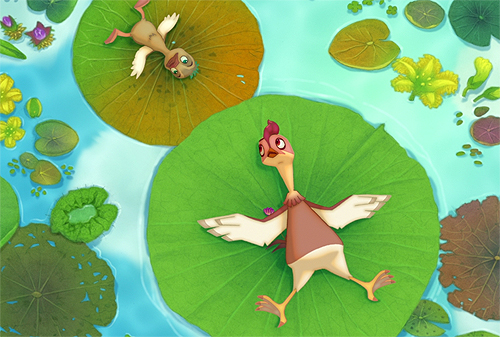 Korea’s highest grossing feature animation <Leafie: a Hen Into the Wild> has sold to Toronto-based 108 Media Group for all English-language rights.
Produced by leading production company Myung Films(The President’s Last Bang) and animation studio Odoltogi, the film is based on a bestselling novel about an amazing hen’s adventures as she escapes to freedom, adopts a duckling as an egg, and ultimately makes a great sacrifice for motherhood.
Finance, production and distribution company 108 Media Group will rebrand the South Korean animation for the Western audience with English-language dubbing and will directly release the film in North American theaters.
Myung Films' International Advisor Paul YI struck the deal with 108 Media Group CEO Abhi RASTORI. The company is due to announce further details of the theatrical release at a later date. 108 will also be Myung's exclusive agent in finding partners to exploit the animation’s merchandising and game rights in North America.
Directed by OH Seong-yun, <Leafie: a Hen Into the Wild> took in more than 2.2 million admissions at the South Korean box office when it was released this past summer. It was also recently released in mainland China by Dadi, on 1,000 screens. The film clocked upUS$618,300 (CNY3.93 million) in its first week.
Seoul-based sales company Finecut, which handles the rest of the world for <Leafie>’s international rights, has sold the film to a slew of territories including German-speaking territories, Brazil, Portugal, Turkey, the Middle East, Indonesia, and ex-USSR excluding Baltic States.
The film recently won at the Asia Pacific Screen Awards (APSA) for Best Animated Feature Film. The prize was given to producersLEE Eun, Jaime SHIM, and Kim Sun-ku.
Dec. 2, 2011
Any copying, republication or redistribution of KOFIC's content is prohibited without prior consent of KOFIC.
Related People Related Films Related Company